Also known as the Cape Baboon, the Chacma Baboon is a member of the Old World monkey family. This species is one of the largest in size and weight of all of the baboons measuring about 115 centimeters and weighing 15 to 31 kilograms. The Chacma Baboon is usually dark brown or gray and has a patch of very course hair at the nape of its neck.

One big difference between this type of baboon and others is that the male Chacma Baboon does not have a mane. Another way to differentiate this baboon from others is that they have a very long, downward pointing faces. Those that come in contact with these animals will also find that the species has quite large canine teeth, which measure as long as two inches and that the males are much larger than the females. The Chacma Baboon is found in southern Africa from South Africa to Angola, Zambia, and Mozambique. There are many different varieties throughout these ranges that have different colorings such as the Cape Chacma and Gray-footed Chacma. There is another member of the species, which is the Ruacana Chacma, which is usually found in Namibia and Angola that is much smaller than the other versions of the animal.

The Chacma Baboon seems to be quite adaptable because it can be found in very grassy areas to the Kalahari desert. These baboons are often found in the same areas that are inhabited by humans, but they are known to keep their distance from them or simply not take much interest in them at all, though in some areas this is not the case as people feed the baboons.

Being omnivores and living in a wide range of places the Chacma Baboon will generally eat whatever they can find in the area in which they live. They are known scavengers and will eat fruits, insects, seeds, and small animals. Many baboons have found that humans are an excellent source of food and will take food from them or simply visit areas where humans leave their food remains. 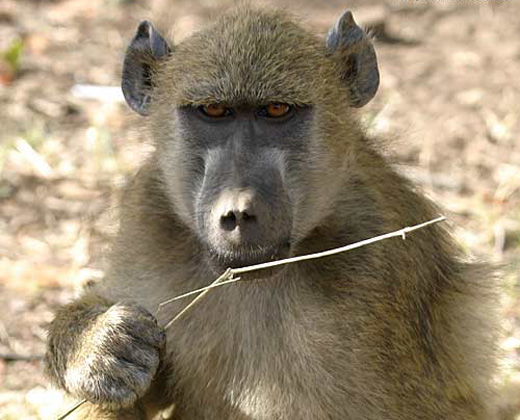 The Chacma Baboon is a social animal, and therefore lives in small social groups that have males, females, and young. It seems as though there is a very strong hierarchy among the groups that is passed down from one generation to the next. Those that seem to have the closest relationships are unrelated males and females. Groups of Chacma Baboons are referred to as troops, and each troop has their own behavior and means of communication that may include facial expressions, calls to one another, sounds, and even touch of one baboon to the other.

These baboons are still available in vast numbers, which is why they do not rank amount the endangered species that inhabit the same areas. Though they are not listed as endangered now, many think that this will change within the next ten years due to habitat loss, which is already being seen in some areas with troop sizes dwindling year after year.