Known for being the largest pinniped as well as the biggest member of the Carnivora order, the elephant seal is one of just two species of the animal.  This species was named for its massive size as well as the big proboscis that is seen on the adult males.  This proboscis is used to make large roaring noises to communicate with other elephant seals. The noises become louder and more constant during the mating season. 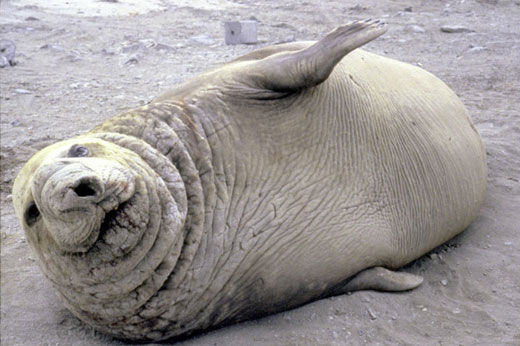 Many came to know the elephant seal because it was near extinction as they were widely hunted in the 19th century.  Because they were protected the population is up around 600,000 though it should be noted that the numbers are declining, but no one knows exactly why.  Many believe that the number is simply stabilizing as the species may have grown to quickly while being protected and the natural order of things is simply taking place.  Needless to say, conversationalists are watching the numbers of the elephant seal closely.

The elephant seals are generally found in the sub Antarctic regions around the world.  The species used to be seen quite often in large numbers around Tasmania, but this is no longer the case as the sealing industry led to the decline of the species and now they are only occasionally seen.  Today they are often seen off the coast of South Africa and New Zealand, Macquarie Island, Peninsula Valdes, Heard Island, and Kerguelen.  One of the most substantial populations is located in the Sub Antarctic islands, especially around South Georgia.

The elephant seal will hunt for their food during dives that last up to two hours.  The species usually feeds in deep water and will actually dive down to depths of 1700 meters.  The animals feed on cephalopods such as cuttlefish and squid and they are also known to feed on various types of deep water sharks.    The elephant seals spend almost all of their time under water, only needing to spend a very limited amount of time on the surface.  Being so large, the species only has one predator, which is the orca, also known as the killer whale.

The southern elephant seal breads any time from August to November.  The males arrive in advance of the females and they lay claim to their territories through a series of loud roars and by fighting to establish dominance.  The relationships of these animals are not monogamous, in fact a male may impregnate as many as 60 females during a mating season.  The males often have to go months without eating to ensure that no other males take over their territory and mate with their females. 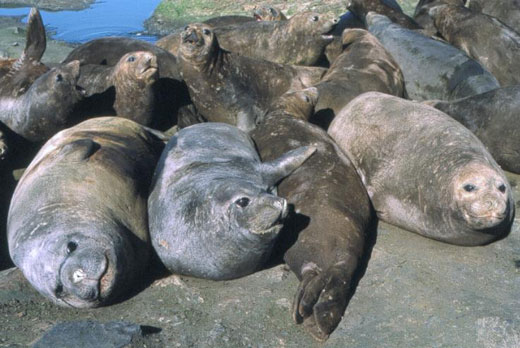 A bunch of southern elephant seals enjoying the sun

The males generally have to live off of their blubber during the mating season because if they leave their territory their females will be seduced by other “beta” males. The southern elephant seal pups are born about 10 days after their mother comes on shore and then they are nursed for about three weeks. Then they are left to fend for themselves, as the female will go and mate again to produce more pups.  Many pups never make it to the water once they are left on their own due to overcrowding, they are often crushed.