A family were living in fear in Queensland, Australia, after a massive snake ate their pet dog.

A 16ft python had been stalking their pet Chihuahua for days before following him into the family home.

It curled up on the Chihuahua’s bed prior to eating him in front of the pet’s owner, Daniel Peric.

Daniel Peric and his two children watched in terror as their dogs back legs were left hanging from the snake’s mouth. 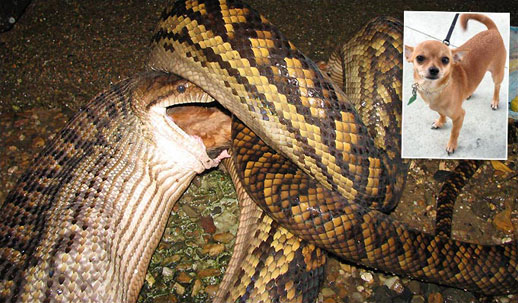 Just Days before, the Australian family lost two other pets; a guinea pig and their family cat. They were also eaten by snakes around their home in Queensland.

Daniel said: “We have air conditioning ducts installed and I’m petrified a snake will get in there and take the children.”

The 16ft python, which generally eats wallabies, a close relative to the kangaroo – was taken into captivity at a local zoo.