The Sparrow is native to nearly every country in the world.

It has followed humankind and has been introduced either on purpose, or accidentally, to most countries and areas world wide.

In the US, it is called the English sparrow, which helps to keep it separate from the native variety. During the latter part of the 19th century when insects were a large problem and produced diseases, the sparrow was imported to the US and introduced in many cities to help with pest control. 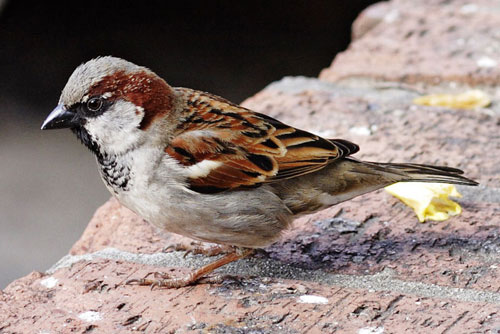 The sparrow was a hardy bird and thrived in the new environment. It now presents a few problems of its own making.

When homes are built eventually, the sparrow will come to share them with people.

The sparrow however seems to be wary of men, although they do build closely with them and sometimes rely on them for food.

Sparrows are only about 16 centimetres long, and are readily found in many climates.

In hills and mountain ranges they are scarce and hard to find, but in cities, towns and villages it is very prominent in the landscape and ecology.

Males have gray heads, cheeks and underbellies, with black on the throat and upper breast as well as between the eyes and on the bills.

The bill is heavier toward the nose area, and thinning at the tip. In wintertime the males feathers seem to be dulled down by paler edges.

This may be due to increasing feathering for warmth.

The female sparrow has no black on her face of throat, and her upper areas are brown streaked with some patches of reddish brown. The House Sparrow is confused quite often with the smaller and tinier built Tree Sparrow with the main difference between the two beings that the Tree sparrow has a chestnut colored head and two very unique wing bands as well as black on both cheeks.

Females will nest in higher aspects of trees, particularly deciduous trees, building the nests from grasses and twigs.

She will produce from 2 to 5 eggs, which hatch in about 21 days.

The sparrow babies are fed insect larvae, while the adults will eat seed or grain, often taking grass seeds or other seed meant for human use and cause some small destruction.

In spring and summer sparrows will eat flowers, primroses and violets, any sorts that are yellow in particular. They seem to be attracted to the color.
Find out more about the Sparrow over at Wikipedia »