The Kosmoceratops was only recently discovered. It was a herbivorous chasmosaurine certopsian dinosaur, that lived in the Campanian time of the Late Cretaceous period. It was discovered on what was the island continent of Laramidia, which is now Utah in the United States of America. Its fossils were recovered from the Kaiparowits Formation at the Grand Staircase-Escalante National Monument. It was named in 2010 in honour of Scott Richardson, who was a volunteer who discovered the holotype specimen as well as other fossils around the Grand Staircase-Escalante National Monument. 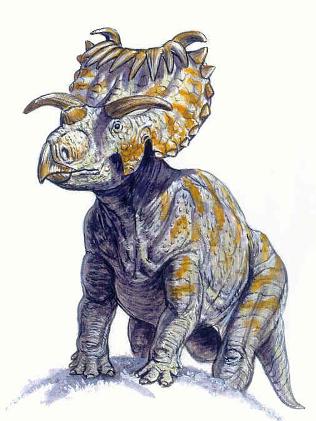 This dinosaur is distinguishable through its ornate skull, as it is actually the most ornate skull known of any dinosaur fossils that humans have ever discovered. It has horns above the eyes which are thin, long, and pointed. They project from the skull and curve downwards. This is different to other ceratopsians, as their horns are either forwards or backwards oriented. Kosmoceratops also have a forehead-like hump on the roof of their skull in front of their eye sockets. Their nasal horncore which is a bony part of from where the nose horn grew, it flattened and is reminscent of a blade. Its frill is quite short, compared to its ceratopsian relatives. It is twice as wide as it is long. It also had two holes in its frill, which were rather small and positioned towards the back. The is different to other chasmosaurines as they are known for their elongate frills. The Kosmoceratops also had 10 hook-like projections at the frill. 8 of these hook-like projections curved forwards to overlay the frill, while the other 2 are positioned on either side and curved laterally. Overall, there are a whopping 15 horns on the skull – the most out of any ceratopsian discovered. As mentioned above, the Kosmoceratops as well as the majority of chasmosaurines lived in Laramidia which was an island continent that now forms the western part of North America. During the Late Cretaceous period, Laramidia was separated from the eastern North American landmass called Appalachia. It was separated by the Western Interior Seaway. Howevre, a major evolutionary radiation took place on Laramidia, and two endemic fauna may have existed in separate provinces or biomes. One is to what is present-day Utah (southern) and the other in present-day Colorado (northern). The Kosmoceratops lived in the southern province.

It is thought that the Kosmoceratops appeared in the southern province after the barrier appeared between Utah and Colorado, which separated the two provinces. When the barrier disappeared around 75.7 Ma, the Kosmoceratops migrated northwards. In the northern province, Vagaceratops appeared, which would later give rise to chasmosaurines of the late Campanian and Maastrichtian stages, such as the famous Triceratops.