It’s not always the case that science and religion agree with each other. However, scientific researchers have just confirmed what believers of the Abrahamic religions already knew – that the miraculous parting of the Red Sea for Moses and the Israelites to escape from the Pharoah is entirely plausible, according to new computer simulations. The physics of a land bridge. This illustration shows how a strong wind from the east could push back waters from two ancient basins--a lagoon (left) and a river (right)--to create a temporary land bridge. New research suggests that such a physical process could have led to a parting of waters similar to the description in the biblical account of the Red Sea. (Illustration by Nicolle Rager Fuller)

As part of a larger study about the impact on wind on water depth, researchers from the University of Colorado at Boulder and the National Center for Atmospheric Research (NCAR) discovered that it is possible that the parting could have happened. The conditions involved include having a “strong easterly wind, blowing overnight, could have pushed back water at a bend where an ancient river is thought to have merged with a lagoon on the coast of the Mediterranean Sea.” Their study was published in the online journal, PloS ONE.

In a press release, the lead author of the study, Carl Drews of NCAR, “The simulations match fairly closely with the account in Exodus… The parting of the waters can be understood through fluid dynamics. The wind moves the water in a way that’s in accordance with physical laws, creating a safe passage with water on two sides and then abruptly allowing the water to rush back in.”

Computer models that the researchers used were based on a reconstruction of the most likely location of this biblical phenomenon as well as the depths of the Nile delta’s waterways at the time this event is supposed to have happened around 3,000 years ago.

Explanations prior to this study of this miracle have included a tsunami. However, a tsunami would not have been able to cause a gradual overnight retreat of the water or be associate dwith winds. On the other hand, other researchers have looked at ‘wind set downs’, which is the opposite of storm surges. In other words, this is wher strong and persistent winds can lower the levels of water. According to Drews, “Wind setdown occurs when wind blows across a body of water and part of the water level drops, and so it exposes dry area. That’s a well-known phenomenon.”

A study by Russian researchers before this combined study by NCAR and the University of Colorado concluded that hurricane-force winds of 74 miles per hour could have exposed an underwater reef located near the Suez Canal. However, Drews and his co-author, Weiqing Han, were not convinced that the reef would be completely exposed or that people could cross in such strong, hurricane-force winds.

As part of this study on how wind affects water, Drews and Han pinpointed a location which was 75 miles north of the Suez Canal, by studying old topographic maps of the Nile Delta. The historic depths and water flow of this area were estimated from archaeological records, modern maps, and satellite measurements.

According to their computer models, it was found that winds with a speed of 63 miles per hour, lasting for 12 hours could push back waters about 6 feet deep. As a result, this would have exposed approximately 2 mile long by 3 mile wide mudflat passage which was open for 4 hours. When the wind stopped, the waters would then quickly come back rushing in – just as what was described when Pharoah’s army tried to pursue the fleeing Israelites.

Drews said, “People have always been fascinated by this Exodus story, wondering if it comes from historical facts. What this study whows is that the description of the waters parting indeed has a basis in physical laws.”

For more information, please see the videos below:

Parting the waters, Part 1: The physics of a land bridge 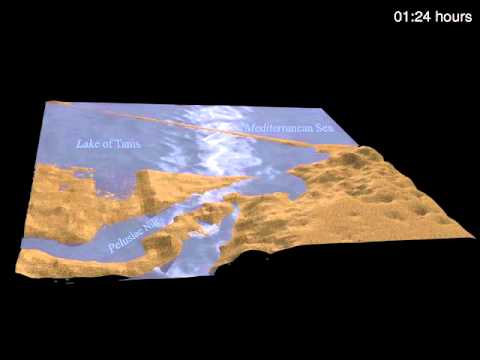 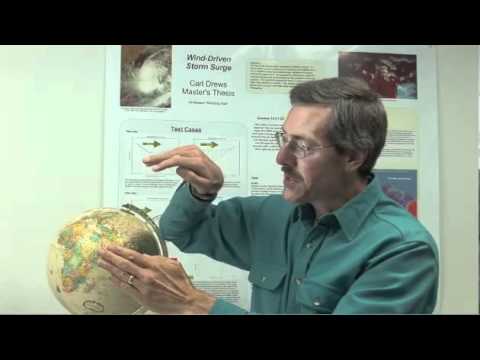