The Banker Horse is a feral breed of domesticated horses that live on the Outer Banks in North Carolina. They are descended from Spanish horses that were domesticated and they may have been brought to the Americas during the 16th century and may have either been abandoned on the islands on the exploratory expeditions by Sir Richard Grenville or Lucas Vazquez, or perhaps even survived shipwrecks. Its population is currently found on the Currituck Banks, Shackleford Banks, Ocracoke Island, and the Richard Carson Estuarine Sanctuary. As they are a descendant from Spanish Horses, they are not considered to be indigenous to the islands. They also trample on plants and on animals that nest on the ground, but these horses remain here due to their historical significance. They survive by grazing on marsh grasses and temporary freshwater pools.

They are managed by the the State of North Carolina, National Park Service, and several private organizations to prevent overpopulation, inbreeding, and their habitat from being overgrazed. They are also monitored for equine infections anemia which was first discovered but fortunately later eliminated in 1996 at Shackleford.

The Banker Horse is small, and stands at only 132 to 150 cm high at the withers. It weight about 800 to 1000 pounds and its forehead is broad. Its chest is narrow but deep, and its back is short and they have a low set tail. Their legs are very strong. Their coat can be any color, but are usually chestnut, bay, brown, or dun. They have an excellent temperament, as they are docile, friendly, and hardy.

There are currently about 400 Banker Horses that live on the narrow barrier islands of North Carolina’s Outer Banks. These islands are usually less than a mile wide, and are 30 miles away from the shore. The islands are separated by bodies of water such as a sound or an estuary. The vegetation is sparse, and only consists of a few stunted trees and coarse grass. This is why they have a small stature, partially because of the limited nutrients in their diet. They prefer eating Spartina grasses, but also eat sea oats, bulrush, and even poison ivy. Those living closer to human habitats such as those at the Currituck Banks have been known to eat residential lawns and landscaping. 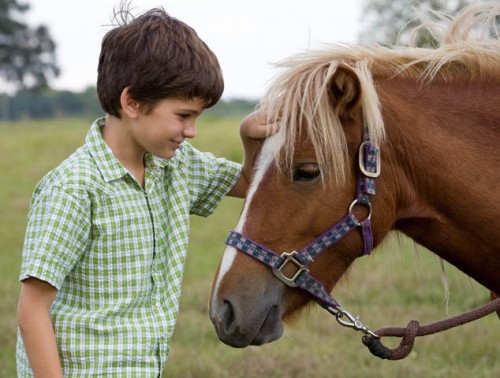 Banker Horses can be adopted and are great with kids

The water around the Outer Banks are salt-water. There are also no permanent ponds or freshwater springs. As a result, they are dependent on any rainwater and the moisture in the vegetation they eat. They will only resort to drinking sea water if they have to. As a result, they look a bit bloated because of water retention caused by an osmotic imbalance.

Some Banker Horses have been adopted due to their calm disposition. Adopted Banker Horses are often used for driving or pleasure riding. They are also used as children’s mounts, and are used in several horse-mounted patrols. During World War II, the Coast Guard used them for patrols, and they were also used in the 1980’s for beach duty at the Cape Hatteras National Seashore. Prior to 1915, they were used by the United States Lifesaving Service for beach watches and rescues, as well as to haul equipment to and from shipwreck sites.