Marsupial Treefrogs take care of their young in a way similar to kangaroos. They carry the babies on a pouch on their backs, until the children are mature enough to start their own lives. Although the Gastrotheca family includes multiple species, they are all fairly similar in lifestyle and habits.

These frogs are fairly small, reaching a size of only 2-10 cm, depending on the exact species. All of the species, however, have characteristics that distinguish them from frogs of other families.  First of all, their skin easily takes in water, and easily also excretes it, which is why the frog needs to remain in a humid area to survive. The colour of the skin itself varies from species to species, but it is most usually suited to blend in with the forest, being either green or brown. Another thing that distinguishes Marsupial Treefrogs from other frogs are the suction cups at the end of their legs, which allow the frog to attach to branches and leaves. All species of the Marsupial Treefrog family inhabit Central and South American rain forests.

Marsupial Treefrogs live in the jungle of South and Central America and spend most of their time, looking for food in the trees. They’re also nocturnal creatures, because the dark covers them from predators, and secondly because going out during the day poses the risk of dehydrating, which is a big threat for these frogs. During the day, they stay in shadow, trying to blend in with the surroundings by using the camouflage colours. They feed mostly on bugs that are found in the trees. Some species also prey on flying creatures, such as flies or mosquitoes, but mostly ground hunting is preferred. As in the case of many other frog species, Marsupial Treefrogs can only see moving objects, which means that if the creature the frog is hunting holds still, the frog will lose interest and go away. If the bug hasn’t been so careful, however, the frog immediately shots out a sticky tongue and swallows it whole, just seconds later.

Unlike most frog species that lay millions of eggs and leave them, which results in most of them dying, the Marsupial Treefrogs take special care when tending to their young. They lay 4-200 eggs depending on the species. As the eggs are laid, the male frog fertilizes and puts them in the female’s pouch, which is a crease on the mother’s back. The eggs develop and hatch inside the pouch and 3-4 months later, when they can start independent lives, they leave the pouch. 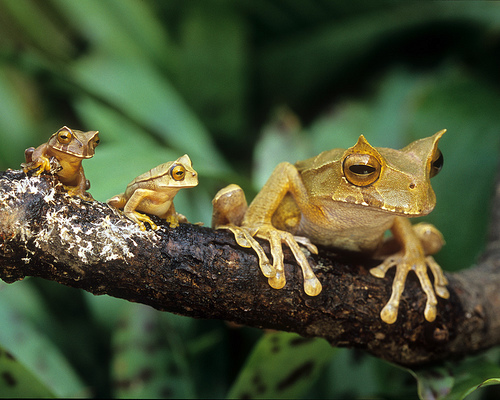 Marsupial Treefrogs have adapted to a special lifestyle that allows them to live in tropical environment and even reproduce without visiting a water source where to lay eggs. Unfortunately, the unique characteristics have also put them at a risk, as more and more rain forests are being destroyed and the frogs can not survive in less humid environment, many of the Marsupial Treefrog species are facing extinction.