Skip to content
HomeWhat on Earth?10 Beautiful Yet Toxic Caterpillars

Caterpillars come in a variety of colors, shapes and sizes. Their beauty can often be deceiving since their hairs often contain venom which can be poisonous to humans and predators. Toxic caterpillars can be found in many places including backyard gardens, parks and fields. The following list describes 10 of the most beautiful, yet dangerously toxic caterpillars in the world. This unique looking slug caterpillar is mostly green with brown at each end with a white-ringed purple-brown dot in the center which looks like a saddle. When fully grown, it measures approximately one inch long and 3/8 inch wide. It has a pair of fleshy horns at each end which contain hairs that secrete irritating venom along with protruding spines in every direction. Its stings are painful and can cause swelling, nausea and a rash which lasts for days. The Saddleback Caterpillar can be found in gardens, flower pots, fields and forests. It eats everything from garden plants to trees and shrubs. This creature starts off pale yellow, but later develops the bright orange/yellow and jet black striped bands. It has a voracious appetite and can consume entire areas of weeds. When it runs out of food, or sometimes for no apparent reason, it can actually turn cannibalistic. The Cinnabar Moth Caterpillar was introduced into New Zealand, Australia and North America to biologically control poisonous ragwort and Tansy. Oftentimes, these caterpillars cluster together in an attempt to defend themselves against predators. As they age, they tend to act aggressively toward each other. Survival is often cut short due to completely consuming food sources before reaching maturity. This yellow, black and white striped caterpillar is so small immediately after hatching that it can barely be seen. It has two pairs of black filaments, one pair on each end of the body. It grows very fast, feeds only on milkweed leaves and cannot exist without them. When fully grown, the Monarch Caterpillar is about 2 inches long. Although beautiful to look at, it is poisonous or distasteful to birds and mammals due to cardiac glycosides that are contained in the milkweed it eats. When the Monarch Caterpillar emerges into a butterfly, it is considered the most beautiful and “king” of all butterflies. Present from May through mid-July, newly hatched Gypsy Moth Caterpillars are black with long stiff bristles. Older caterpillars have five pairs of raised blue spots and six pairs of raised red spots on their backs with fewer hairs. The hairs can cause pain on contact and lead to dermatitis. In order to spread throughout the forest, they climb to tree tops, spin a thread, dangle from it and wait for the breeze to carry them away. These caterpillars love to feed on certain types of leaves, such as maple, elm and oak. Damage from feeding infestations can cause complete defoliation leading to disease, vulnerability to other insects or tree death. Known as Processionary Caterpillars for walking in processions, these are amongst the most dangerous and should not be touched. Coming in contact with one can cause external and internal bleeding. The poison contains chemicals which are potent enough to cause humans to bleed to death. Airborne hairs will cause rashes and respiratory problems. Bag Shelter Caterpillars are dark brown with a brown head and long soft hairs. They live inside a brown bag made of silk and come out at night to feed. They can be found resting or hiding on the base of medium to large size wattle tree trunks and eat the leaves. The most poisonous caterpillar in North America is the Puss or Woolly Slug Caterpillar. Don’t be fooled by its fluffy cotton ball appearance as it will release acid on anything that touches it and is loaded with poisonous spines all over its body. Although the long, soft hairs are harmless, the spines can cause immediate, excruciating pain. Symptoms from a sting can last several days and include headache, nausea and vomiting. Its colors vary from grayish-white to golden-brown to dark charcoal gray and its body tapers to a tail. These inch long caterpillars can be found in citrus trees, elms, oaks and garden plants. The flamboyant Stinging Rose or Rose Slug Caterpillar is less than an inch long and comes in red, orange and yellow with purple and green pinstripes. It proudly wears its bright colors as a warning announcing how dangerous it is; aka aposematic coloration. This colorful species has black-tipped spines with poison glands. Touching this caterpillar will cause the tips of the spines to break off and venom to enter the skin. This can cause an irritating skin rash and a hypersensitive reaction. These caterpillars can be found on woody plants such as dogwood, maple, oak, cherry, apple, poplar and hickory. These black and white caterpillars are covered in grayish-white hairs with black spots on the sides and black tufts along the middle of the back. Two long, sharp, thin black hairs protrude from the front and back of the caterpillar connected to poison glands. Poisoning occurs when coming into contact with hairs or spines and causes skin rashes or hypersensitivity. Hickory Tussock Caterpillars are commonly seen from June to September and can be found in southern Canada and parts of North America. They feed for about eight weeks on hickory, pecan and walnuts in addition to elm, oak and willow. 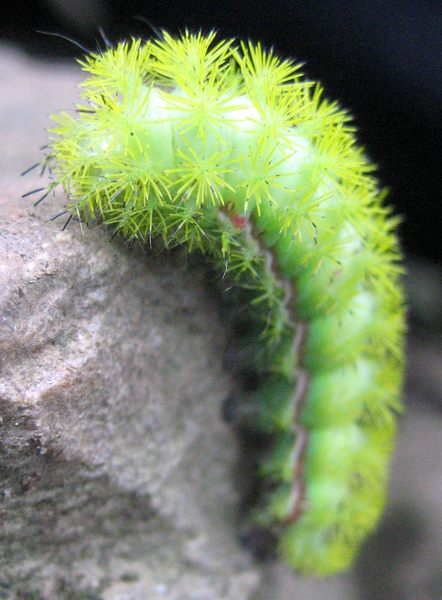 As the Io Moth Caterpillar develops, it goes from orange to bright green with red and white stripes running the length of the body. These two inch creatures tend to travel in single file processions over food plants and young caterpillars feed in groups. Two types of poisons are released from their spines with the slightest touch and pack a powerful sting, burning sensation and inflammation. They feed on many trees and shrubs including willow, maple, elm, oak, holly, aspen, locust, cherry, pear and sassafras. This species can be found in open woods, meadows and cornfields from February through September. This beautiful caterpillar comes in a rainbow of pastel colors including green, blue, pink and yellow and is a little less than an inch long. It is rather flat and has four clusters of darker spines near the hind end. Poison released by the spines can cause a severe reaction and warrant medical attention. The Spiny Oak Slug Caterpillar likes to feed on sycamore, willow, ash, oak, hackberry and chestnut along with other trees and smaller woody plants. This species can be found in the woodlands from southern Quebec to Maine and south through Missouri, Texas and Florida.