Skip to content
HomeWhat on Earth?22 Sea Creatures That Will Keep You Dry

Here’s something to keep in mind the next time you find yourself fancying a quick swim to cool down after a hot day on the beach… 22 sea creatures that are lurking below, sharing the same waters. Keep our advice… If it’s not chlorine, stay well away! The stargazers are a family Uranoscopidae of perciform fish that have eyes on top of their heads (hense the name). The Lizardfishes are a family, the Synodontidae, of aulopiform fish. They are found in tropical and subtropical marine waters throughout the world. 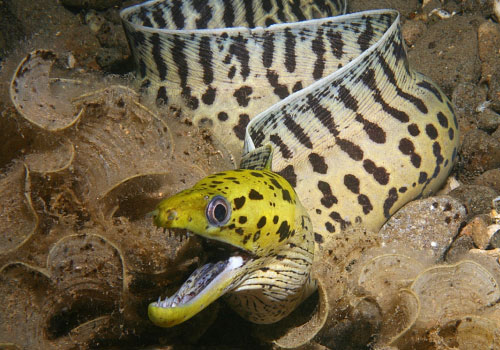 The fimbriated moray eel is of the family Muraenidae, found in the Indo-Pacific oceans, around reefs, harbours and small caves, at depths down to 45 meters. Related to both shrimp and crabs, Giant Isopods are found deep in the cold Atlantic waters. A viperfish is a deepwater fish in the genus Chauliodus, with long, needle-like teeth and hinged lower jaws. They grow to lengths of 30 to 60 cm (12 - 24 inches). Giant squids can grow to an incredible size; estimates put the maximum size at 13 metres for females and 10 metres for males. Due to the gulper eel's specialised body shape, it is a poor swimmer and relies on the luminescent organ at the tip of its tail to attract prey. 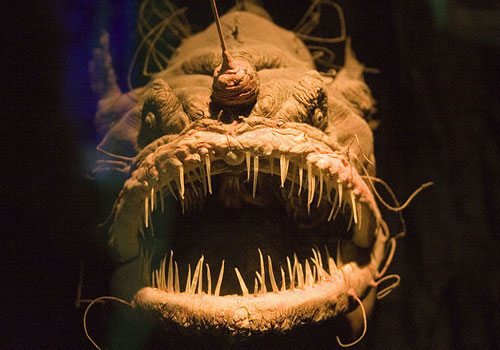 Anglers are bony fish named for their characteristic mode of predation, wherein a fleshy growth from the fish's head acts as a lure; this is considered analogous to angling. Barreleyes are also known as the spook fish, they are small, unusual-looking deep-sea osmeriform fish comprising the family Opisthoproctidae. Found in tropical waters of the Atlantic, Pacific, and Indian Oceans 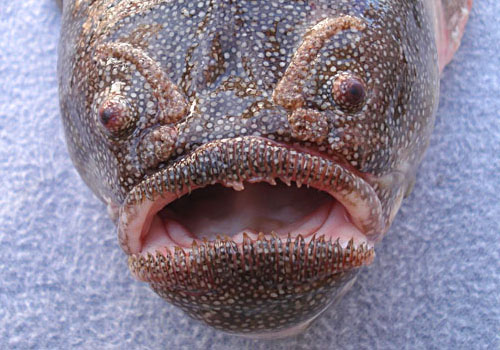 Coffinfish are bottom-dwelling fishes found on the continental slopes of the Atlantic, Indian and Pacific Oceans, at depths of up to 2,000 metres (6,600 ft). "A face not even a mother could love" The Atlantic Wolffish, also known as the Seawolf, Atlantic catfish, ocean catfish, wolf eel, or sea cat, is a marine fish, the largest of the wolffish family Anarhichadidae. Chimaeras are cartilaginous fish in the order Chimaeriformes, known informally as ghost sharks. They may be the oldest and most enigmatic groups of fishes alive today. The axolotl is the best known of the Mexican neotenic mole salamanders. Larvae of this species fail to undergo metamorphosis, so the adults remain aquatic and gilled. Axolotls are used extensively in scientific research due to their ability to regenerate most body parts. Living up to its name, the lumpfish has scaleless skin with a bumpy ridge down its back (which is actually a modification of the first dorsal fin) and rows of knobby protuberances, called tubercles, down each side. The Vampire Squid, or Vampyroteuthis infernalis (which literally translates as “vampire squid from hell”), is another inhabitant of the deep sea, usually found in temperate and tropical oceans and was actually incorrectly identified as an octopus when it was first spotted. 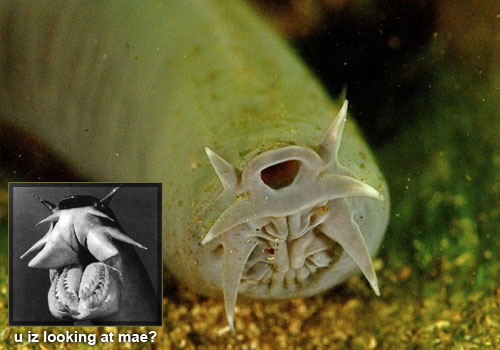 Hagfish have elongated, eel-like bodies (so flexible they sometimes tie themselves in knots). They have four hearts, two brains, and a paddle-like tail. Fangtooths are deep-sea, ferocious-looking beryciform fish of the family Anoplogastridae. Found in the tropical waters of the Pacific and Atlantic Ocean. A lamprey is a parasitic marine/aquatic animal with a toothed, funnel-like sucking mouth. Translated directly, their name means stone lickers. The sperm whale is a marine mammal species, order Cetacea, a toothed whale having the largest brain of any animal. The frilled shark is one of the two extant species of shark in the family Chlamydoselachidae. This uncommon species is found over the outer continental shelf and upper continental slope, generally near the bottom though there is evidence of substantial upward movements. The Piglet Squid, Helicocranchia pfefferi, is about the size of an orange, it was named because of its tuft of bristle-like arms and tentacles and rotund shape, is normally found more than 320 feet (100m) below the surface of the ocean. The great white shark, also known as white death, is a large lamniform shark found in coastal surface waters in ALL major oceans. It becomes sexually mature at around 15 years of age and has a lifespan of 30 to over 100 years. It's arguably the world's largest known predatory fish and is the only surviving species of its genus, Carcharodon.