The Galago is an animal that is known by many names such as bush babies or nagapies. The term nagapies actually means “little night monkeys” in Afrikaans, so it is quite fitting. These beings are actually small primates that are nocturnal in nature. Many people refer to these primates as bush babies because of the cries that they elicit as well as their appearance. This species is almost never seen except after the sun has set.

Galagos are known for their very large eyes and it is these eyes that allow them to see in complete darkness. They are able to leap from one branch to another and can run along branches, as well. They have very strong limbs, excellent hearing, and long tails that provide them with the balance that they need as they navigate through the trees. The species has nails on most of their toes, except for the second toe of their hind feet. 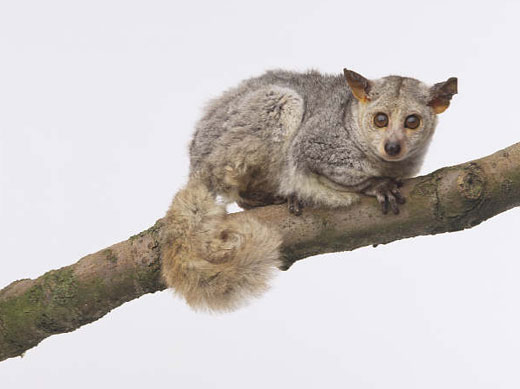 These small primates are native to Africa though they may be found in other areas due to transportation of the species. The Galago is often found to be sharing the same habitat of monkeys throughout East Africa but also in the woodlands and bush lands of the sub-Saharan. These animals are generally found in altitudes that are less than 6,500 feet and they usually live in hollow trees, in forks of branches where nests can be built, as well as natural holes in trees. When living in trees the Galago will generally choose trees that do not have grass around the base, which is thought to guard the primates from predators in the grass as well as fires.

The Galago is an animal that has a diet that changes with the seasons as it eats what is available. The diet of this small primate is usually made up of leaves, fruit, and small insects. The reason that these primates are able to live with other monkeys is because they are nocturnal and they do not compete ecologically with the monkeys that live in the same area. 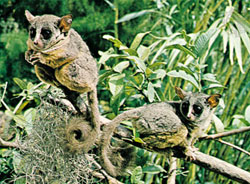 One can generally spot a female that is about to give birth based on her very aggressive and non social behavior after being pregnant for four months. The species is known to have up to three babies at a time and each baby weighs about half an ounce. The mother has direct contact with her young at all times for the first three or four days by carrying them in her mouth or hands or having the baby cling to her.

Within a few days the mother will leave them alone in the nest, take them with her as she goes about her business, or allow them to hang onto her back and belly. The mother feeds the babies for six weeks and then they begin feeding themselves almost exclusively by two months. The babies grow very quickly, causing the mother to move slowly and awkwardly when she has her growing young with her. The species generally lives for 14 years and will weigh five to ten ounces when fully grown.