Also known as the Monyet Belanda, Bangkatan, or even the Long-nosed Monkey, the Proboscis Monkey is an arboreal Old World monkey. The monkey is most well known for its very large nose as well as its reddish brown color. The nose is the first thing to be seen on this monkey and that is because it is unlike any other primate nose that you will see. The unique nose, measuring up to seven inches in length, is only seen on the males and is thought to have something to do with a mating ritual. The nose does more than attract mates, it also swells with blood when the animal is angry or upset and makes warning calls louder and much more intense than other species. 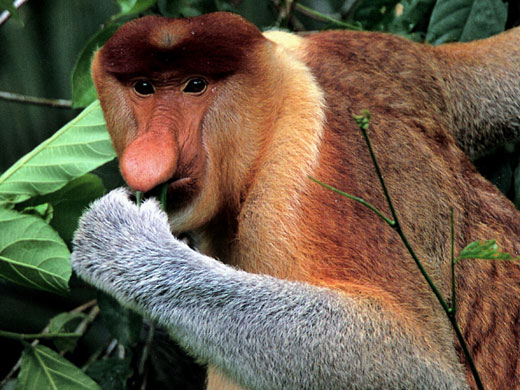 The Proboscis Monkey can most often be found in Borneo’s mangrove forests, swamps, and even the lowland riparian forests. The primates are known to move easily between dry land and shallow water and they even swim in deep water. What makes these primates unusual is that they move about from island to island, and in doing so they are often seen walking upright in a single file line. These monkeys basically move from area to area as they see the need to meet feeding and shelter needs.

The Long-Nosed Proboscis Monkey
The Proboscis Monkey is known for the size of its belly and that is due in large part to what they eat. Because of what the primates eat, its digestive system is broken into compartments where bacteria digest cellulose and do away with toxins that the monkeys ingest from certain foods. This digestive system allows for the species to remain in the forest canopy and feed on plants that would otherwise make them quite ill. Because of the makeup of the digestive system, the contents of the Proboscis Monkey’s stomach make up for a quarter of their weight! One downfall of the system is that these primates are not able to digest ripe fruit; therefore they eat mostly seeds, leaves, mangrove shoots, and unripe fruits.

Despite their ability to remain in the canopies of the rainforest the monkeys are often found swimming and are therefore picked up by fishermen and kept as pets or even captured for their skins. Due to hunting and the loss of natural habitat, there are only about 7,000 of them left the world over. The species is listed as endangered on the International Union for the Conservation of Nature and Natural Resources’ red list. As a result, these monkeys should be protected and their habitat respected.