Alpaca or as the romans would have called it Vicugna Pacosis a domesticated South American camelid (llamas and Alpacas are members of the Camel family) that looks like a slightly smaller llama. The wild ancestors of alpacas are called vicuñas. Alpacas are kept mainly for their fur. Ponchos, sweaters, coats, socks and other woven or knitted items are made from the fiber. The wool comes in 52 colors as classified in Peru. It is also becoming more and more popular to keep Alpaca as a pet as it is a gentle animal it can be taught commands and it has a very soft fur

Alpacas are usually 1 (3.3 feet) meter tall and weigh in between 65 – 80 kilos (140 – 180 pounds). Similarly to other camelids, Alpacas have a split upper lip and they occasionally spit. Although it depends on the character some alpacas will spit at you if they do not like you. And sometimes it can get extra gooey if there’s some green and sour stomach acid and semi – digested grass in the spit. When Alpacas get stomach acid reflux or have just spat they make the so – called ‘sour mouth’ with the lower lip drooping.

An Alpaca about to spit

Those domesticated animals live in high mountains and coastal areas in Chile, Peru, Bolivia and Argentina. Although they are very common in these countries there are no wild alpacas in these areas. There are approximately 3-3.5 million Alpacas in the world. The biggest herds are in the plateaus of Peru, where some Alpacas graze in heights up to 3.8 km (2.4 miles) above sea level where only grass grows. The Alpaca farmers try to introduce new kinds of plant life to fulfill the needs of growing herds. However it has become popular to keep Alpacas also in the United States, United Kingdom, New Zealand, Australia and elsewhere.

Alpacas live in harems with one alpha male and several females and their young. Sometimes those harems unite with harems of neighboring territories. Alpacas usually mate in autumn and the pregnancy lasts 11 months. The baby alpacas can walk already an hour after the labor, weigh 30 kilos after 9 months and reach mental and physical maturity in three to four years. Parent Alpacas call their young by humming that is very pleasant to the ear. Also an interesting fact is that Alpacas are naturally very neat when living together. They would all use the same spot of land as batroom. 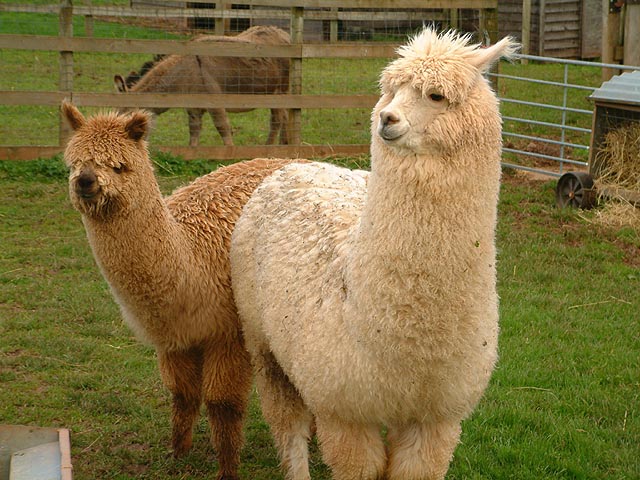 Alpaca meat was considered a delicacy by some and is sold in some countries, however it was banned to slaughter Alpacas and trade in their meat recently in Peru. The meat reportedly tastes a lot like lamb.