Muntjac, also known as the barking deer is a small species of deer that live in Southern Asia. 15-30 million year old fossils show evidence that they are the largest species of deer still present and that they used to inhabit vast territories all over what is now known as Europe. Currently the Muntjac live in Nepal, India, Sumatra, Borneo, Taiwan, China, Java and they have also been introduced to South England.

The body of a Muntjac is relatively small, only 89 – 135 cm and they weigh 15 – 35 kg. All of their body, except the ears, is covered with short, soft fur, which is coloured brown to yellowish, while the calves are generally darker and they have white spots. Male Muntjacs wield short, sharp horns. The largest part of the horns is covered with skin and only the tip of the horns is bare. Although it may seem that the deer uses horns for self-defense, the Muntjac is actually very skittish and always tries to run away from any danger.

Unlike many deers, Muntjacs live alone or sometimes in small groups. They prefer dense forests with plenty of cover, up to 1000 metres above sea level. They are active at twilight, and although they mostly live alone, they still keep in touch with other individuals, leaving a scent on branches, using a special gland on their heads. While grazing, Muntjacs are always attentive and if in danger, will start “barking” in an attempt to try and scare the stranger, as well as to warn other deers about the danger.

These small deers eat grass, fruit, mushrooms, seeds and roots. Many farmers dislike the Muntjac, because they frequently feed on farmland vegetation. Sometimes they will also eat bird eggs or even catch small animals. As all deers, the Muntjac is ruminant, which means they digest the food twice, resulting in a very efficient use of foodstuff.

The Muntjac can mate all year round, although copulation most often occurs in January or February. During this time, females enter the males’ territories and try to keep all other females away. Males also often fight each other, although these confrontations rarely end with serious injury. After copulation, the female finds a well hidden place where to give birth. After a gestation period of about 180 days one or, in very exceptional cases, two calves are born. Muntjacs develop fairly quickly and soon start grazing. When the mother is ready to mate again, she drives the calf away and he has to start a life of his own. 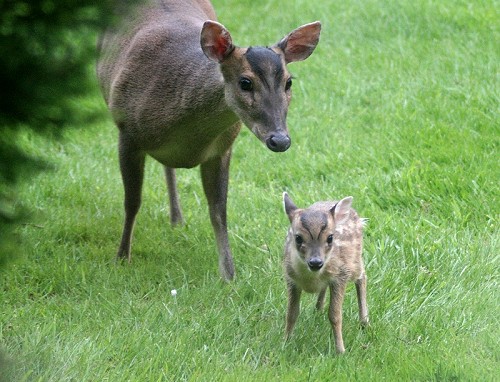 A Muntjac mother with her calf

Muntjacs reach sexual maturity at the age of 6-12 months and they live for up to 10 years in the wild and 17 years in captivity. Currently, Muntjacs are not endangered and they live in two very distant regions – South China and South England, where after they were introduced in 1900 they have have established such a great population that they can even be seen in parks and gardens in London.