The Common Wombat (Vombatus ursinus) is a medium-sized and very skittish animal with a thick fur. Despite the fact that in appearance it seems like a cross between a badger and a small bear, the Wombat is a marsupial – that is, a mammal with a pouch in which to carry the young. Vombatus ursinus lives in Australia, inhabiting almost all regions, except the central ones, and they’re also widespread in Tasmania. 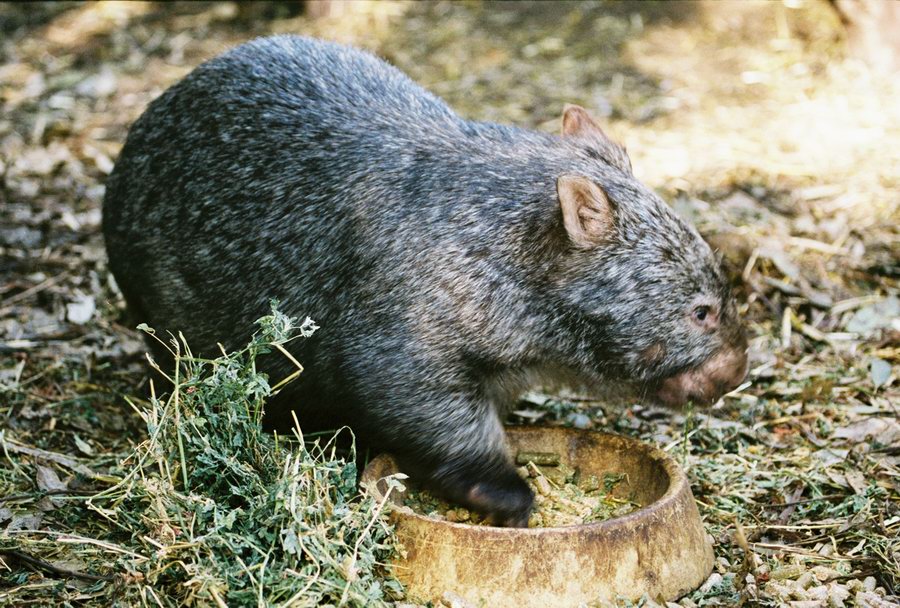 This marsupial reaches an average size of 70-115 cm, with a tail that’s a bit longer than 2 cm. The short and strong legs with the long nails are excellent tools for digging and a mature Wombat can actually dig a hole in the ground as fast as a human with a shovel could. Obviously, this means that the animal spends most its time underground, in holes dug by themselves.

The Common Wombat is a solitary creature, with its natural homeland being hilly areas in deserts and forest sides. Each individual uses ten or more caves at a time, each of which has its own entrance. The Wombat is a nocturnal creature, which means it’s active at night, while spending most of the day resting in one of the caves. Despite their habit of living alone, they’re not territorial creatures and often multiple specimen will have their caves near to each other, or sometimes even intersect. This marsupial’s diet consists mostly of grass. At night, the animal patrols known feeding areas, measuring a distance of up to 3 km per night. They also eat roots, tree leaves, bark and other vegetation. The feeding area is strictly reserved and a Wombat won’t let other individuals enter it. An interesting fact about Wombats is that their teeth remind of those of rodent species – they are very sharp and constantly growing, which means that worn out teeth will grow back in time.

The only time when these animals put aside their solitary habits is the mating period, which lasts April through June, when in Australia it’s fall. After a 20-22 day pregnancy, a single, poorly developed baby is born, who immediately climbs in the mother’s pouch, where they keep developing for six more months. Even after leaving the pouch, the young animal still sticks with his mother for about 11 months and can still hide in the pouch in case of danger. Their total life expectancy is up to 5 years in the wild.

The Common Wombat is known as a pest to farmlands, because their tunnels and caves can damage the soil, making it unable for any vegetation to grow there. In the 19th century, a large number of Wombats were eradicated as a means to protecting the crop fields. Nowadays, however, even though the Wombat is not endangered, hunting the animal has been put to a stop.