The Giant Clam is a sad case, he can’t relocate, because he gets just one chance to find a nice place to live. Once he fastens himself onto a reef spot, he cannot unfasten and will sit there for the remainder of his life.

These folks, who live only on the bottom of the ocean or sea, are the largest bottom dwelling mollusks on earth, reaching four or more feet in length and weighing in at a trim 500 pounds. 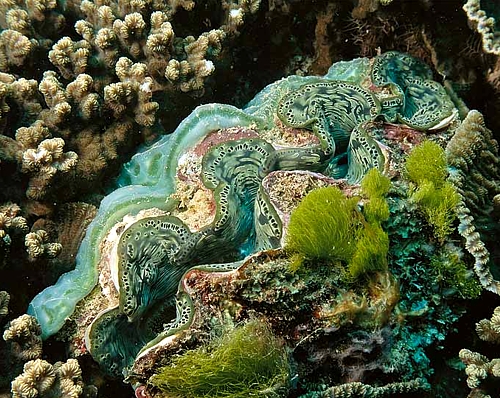 These behemoths live in the warm waters of the south Pacific and Indian Oceans, and achieve their giant size by consuming the sugar and protein that a billion algae that live in their tissues produce for them.

In exchange they offer these algae a safe home and good access to sunlight to provide for their photosynthesis needs, basking during the day with their shells open to the light and their multi-colored mantles exposed.

Clams can live up to 150 years old , and some of them even longer. Scientists believe that some of the larger ones that have been found off the East Coast of the U.S. are over 200 years old.

Giant Clams use a siphon to draw in water to filter and consume passing plankton. Giant clams are excellent bio-filters, which mean they extract nutrients out of the water for their own use and this is how they take in nourishment.
For centuries giant clams have been given the reputation as man eaters, legend describing them as entities that wait to trap swimmers and divers and swallow them whole. Giant clams have some incredible coloration

In reality no account of any human death by a clam has ever been recorded or reported, and scientists say its adductor muscles, which are the muscles that are used for them to close their shell move by far too slowly for them to take a human swimmer by surprise, and that even the largest of them would rather retreat into its shell than to sample a human as prey .

The fertilization only happens when the sperm and egg float near each other. During a breeding season, a female clam has the capacity to make tens of thousands of baby clams and very often in the ocean this will happen, however of those thousands, in most cases, only one settles to the bottom and survives to become an adult clam.

The largest giant clam that has been weighed in so far, weighed about 734 pounds!