The Chimaera is also known as Chimaera fish, ghost sharks, ratfish, or rabbitfishes. These fish are related to both sharks and rays and are a member of the order Chimaeriformes. Unlike a lot of animals that you’ll find in the water, the chimaera has a skeleton that is made up of cartilage and their skin that is very smooth and has no scales also sets it apart from other fish that you may find in the same areas as this species. The chimaera ranges in color from black, to brown, to gray. It has a long thin body, and can grow to be about four and a half feet long.

This species look like sharks in many ways including the claspers that they have, which are used for internal fertilization. While they have this in common with sharks they are different in that they have upper jaws that are one with their skulls and they do not have the many rows of replaceable teeth that sharks have, instead they have permanent plate like teeth that are used for grinding. 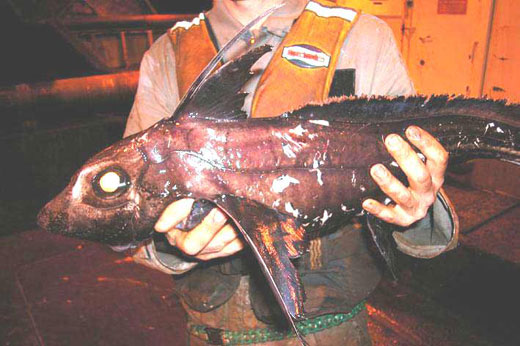 The chimaera is usually found in very deep waters, though they have been found in waters that are as shallow as 1,000 to 1,600 feet. This family includes many different species and variants and they are found all over the world including in North America, South America, and even Europe. Most deep sea fishermen and divers are familiar with some form of the chimaera, as there are 42 known species of the fish that are out there in somewhat large numbers.

These fish dine mostly on bottom crustaceans and mollusks. The fish are able to eat these things by grinding the food with their grinding plates that function much like teeth. 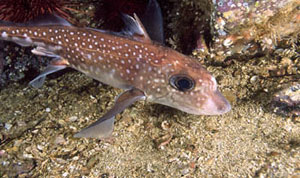 Most of the species of the chimaera lay just two eggs at a time. The eggs are contained in small cases that are said to look very much like a violin case. It takes the eggs four to six days to make their way out of the mother before they drop off of her body.

Most will tell you that this species has little significance or impact on ocean life or humans, but if you talk to a diver that has encountered one of these fish you may hear otherwise. Some of these fish have beautiful green eyes that are often compared to the color of an emerald and they are quite large, like cat’s eyes. When diving a diver may not see all that much that stands out in the depths at which these fish are found, but these fish can turn an ordinary dive into an extraordinary dive. That is thanks to their unusual shape and size, mesmerizing eyes, and movements that many say looks more like flying than swimming because they glide so effortlessly through the depths.