The name given to these guys just about says it all.

Fur seals are beautiful marine mammals that have been hunted for the fur they are wearing, so that someone else could wear it too.

They have a lovely coat of very fine and thick hair that is well suited for their lives in colder climates. It serves to keep them warm when swimming in cooler water. 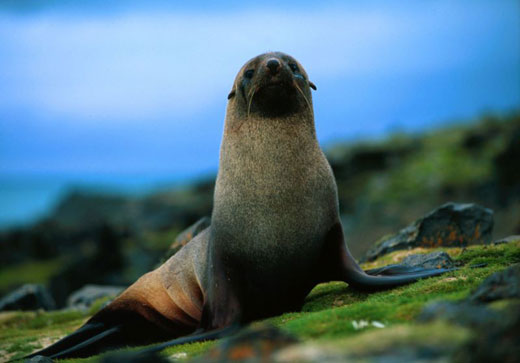 They have very long whiskers and tiny ears.

Fur Seals spend most of their time in the ocean where they swim endlessly. They are interesting animals to watch as they spend a great deal of time in play with other seals.

Fur Seals can hold their breath underwater for very long periods of time, sometimes up to an hour but being mammals they have to breathe air so they have to come to the surface to breathe. 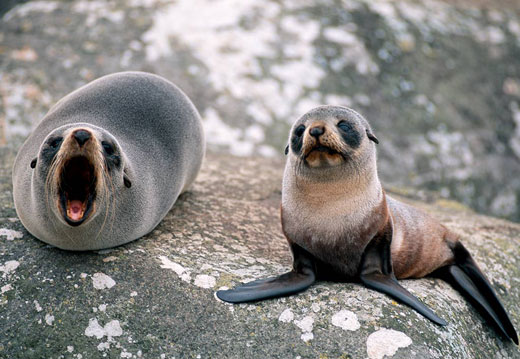 A New Zealand fur seal and her pup

Many seals have drowned when they were caught in nets or lobster traps.

In early spring and summer Fur seals go out onto the rocky coastline to mate and have their babies, which are called pups. Each year they return to the same place and those are called seal rookeries.

In spring and summer they come onto rocky bits of coastline to mate and have their babies. They come to the same place each year. These places are called rookeries.

Males are called bulls. They area great deal larger than the females.

A very cute baby fur seal taking a well earned rest
The males fight for the right to mate with the females, which are called cows.

Some of the fights can be extraordinarily loud and violent but rarely does one of the males get badly injured or killed.

Female seals have just one pup each year, which drinks mild from her for about 8 months.

The mother seals imprint on their babies and can recognize him by sight, sound and smell. At about 8 months the baby seals are taken far out to sea to learn how to find their own food and take care of themselves.

Fur seals can live to be as much as twenty years old.