Jambul, also known as Jambu, an evergreen tropical tree mostly found in South Asia, Indonesia, and Australia. Many mistake the Jambul as a blackberry because of the color of the fruit, but blackberries are entirely a different fruit. The fruit shape and scent resembles an apricot when it is ripe and they are useful for food value and medicinal purpose. The tree itself is known to be one of the most fast growing trees that take up to forty years to reach its full growth. Now, the Jambul can be found not only in Asia and Australia but also in certain regions of South America and North America as well. 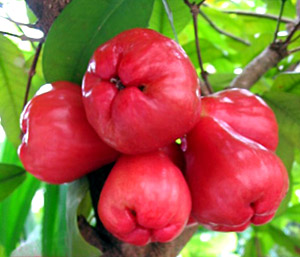 When Jambul fruits are ripened, they are mainly consumed as preserved fruits. This is because ripe Jambul fruits taste like apricots. Depending on the ground where the Jambul tree is grown, the height of the tree differs. In some areas, the tree can grow up to a hundred feet which is estimated up to thirty meters in height. The tree is tall and the fruits will grow in clusters of ten to forty. One of its distinct features is the bottom part of the tree almost to its roots. The bark that covers the lower part of the tree is discolor and has flaking and cracking features.

Each Jambul fruit is known for its smooth and silky skin. The fruits began to grow from a light green color and slowly as it ripens it will become darker and ultimately turns to dark purple or most would say black color. The fruit is rich which astringent and carminative property which can lower elevated blood sugar levels and treat diabetes and any related blood sugar problems. Even the seeds are said to be as beneficial as the fruit as they also contain the same nutrients. Many herbalists would also recommend the fruits and seeds to be taken for those with diet problems. Young women are recommended to consume the ripe fruit and seed in order to reduce period cramps. In many cultures the Jambul fruit are made into preserves such as sauce, jams and tarts because of its sweet and rich fruity taste. Some cultures even turned the fruit into sherbets, sorbets and syrup. Ripe Jambul fruit make delicious and sweet syrup. In certain India region, the Jambul fruit will be fermented to be made into wine and other distilled liquor and brandy.

Some cultures in India uses the Jambul fruit for religious purposes. According to the Hindu followers, Rama; the legendary king of the Hindu followers, were said to have subsisted on the fruit for 14 years before his exile. Also for Maharashtra culture uses the Jambul leaf for marriage pendals. In ancient Tamil cultures, the Jambul fruit are mainly associated with a prominent female poet and activist named Auvaiyar. In Telugu, the Jambul tree is known as Neredu that are used in Andrah Pradesh to make bullock cartwheel. They also sometimes compare beautiful eyes with the seed of the Jambul tree.