May Apple is known by many different names, Indian apple, Racoonberry, wild lemon, hog apple and American mandrake. It is a perennial herb that can be found growing in moist loamy woodland soils on the East coast of North America from the Southern parts of Maine to Florida and may be found as far West as Texas and Minnesota.

It will grow to be around 18 inches in height and the stem will seperate into to parts displaying broad palmate lobed leaves, looking very much like an umbrella when opened.

Growing very well in rich soil and deep shade, Mayapple or American Mandrake has many medicinal quialities and is still used widely by Native Americans.When fully ripe the fruit which resembles a small apple is eaten raw or made into pies jams or marmalades. 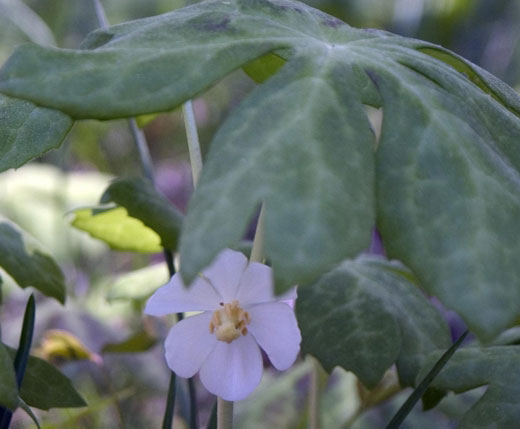 The seeds and rinds, however are not edible. When picked the fruit has a very sweet smell and after the foliage dies the roots can be harvested and used for various purposes.

Some of the constituants of the root are Alpha-peltatin, Gallic acid, and Kaempferol, which are currently under study for having anti-cancer properties because it interferes with cell division and being such could prevent the growth of cancerous cells.

The root has been widely used by Native Americans as a purgative, but while being a useful alternative medicine it should only be administered by a professional herbalist as in a large enough dose it will become toxic.

The resin of the American Mandrake or Mayapple is extracted from the root and is used for the treatment of warts. This plant was once called the witches umbrella because it was said to be cultivated by them and used as a poison and the English version is called manroot or mandrake and the popular legend is that when pulled from the ground it will emit piercing screams said to render a person deaf or insane.