Skip to content
HomeFor Your PetCat Scratching Pad and Toy

Among the most interesting and amusing things on the market for your pet is this cat scratching pad that is combined with a ball chaser toy.  Not only well made, having had a cat rescue we can attest to the fact that this is a toy that no cat can resist.

The Bergan Turbo Chaser cat toy is among the most amusing things we’ve ever watched and literally saved our sofa. Having several cats were were not at allsurprized to find that they had begun to claw readily. We tried several sisal scratching posts which did have a reasonable effect on slowing the scratching of the cats but frankly it simply wasn’t all that it couldahave been. 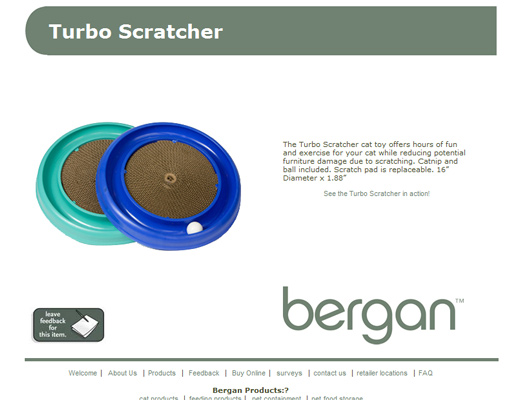 The Bergan Turbo chaser cat toy and cat scratching pad seemed to be their favorite nearly instantly. It comes with a small packet of catnip as well as a round pad made of corrugated cardboard that the cats just could not resist. It  was very literally shredded in a weeks time. Tougher than we gave it credit for it lasted that amount of time with multiple cats absolutely shredding at it. 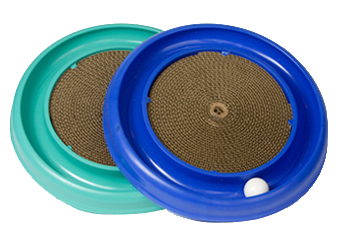 Turbo Scratcher for Cats
We surmise that they enjoyed stretching their bodies out long wise while reaching out in front of htem to scratch, rather than reaching upward. The Turbo Chaser has the cardboard pad on the inside. Surrounding it is a round ditch like effect that has a heavierpingpong type ball in it, only weighted.

One swipe has the ball rolling round and round as if it were on ball bearings. It moves fast enough that the cats had to try to catch it and when they did it went the other direction equally as quickly.

Lightweight enough not to hurt the kittens but heavy enough to be amusing to the larger cats as well, it was one of the most amusing things we’ve ever watched.

The Bergan Turbo Cat Scratcher and Cat toy is something we simply won’t fail to have in our house again even if we have only one cat. They are enough to keep the cats scratching where you want them to and the toy keeps them interested for hours.

To order or find out more about the Bergan Turbo Scratcher and Toy.

Contact Bergan at:
The Bergan Experience, the makers of this feline favorite.