Looking for all the world like a prehistoric sea monster, it boasts a spiked shell, a jaw that reminds you of a birds beak, thick scaly tale and if you didn’t know better you would believe you were looking at a dinosaur. 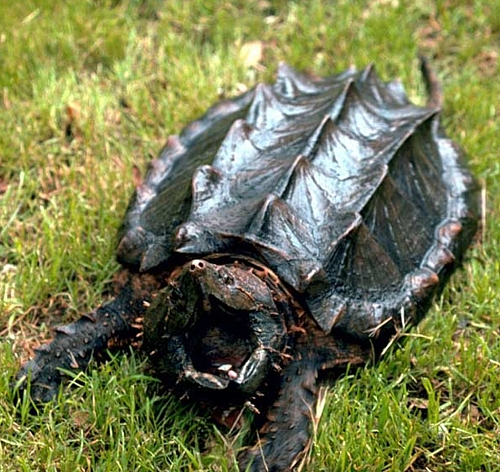 In fact, the Alligator Snapping Turtle is nicknamed the Dinosaur of the turtle world.

You will find Alligator snapping turtles nearly always in rivers, canals and lakes, particularly in the Southern part of the United states, mostly the eastern side, they can and have lived to be nearly 100 years old.

The males average about 2 and a half feet in shell length, and usually weigh about 150-175 although they have been known to grow to weigh more than 225 pounds.

The females are much smaller, usually weighing only about 50 pounds.

Most of their lives are spent in the water, with egg laying being the exception.

When she has mated in springtime, the female will emerge from the water and trudge inland about 50 yards until she finds a place that is suitable for nesting and dig, whereupon she will deposit 25-35 eggs and bury them.

Alligator snapping turtles then return to water and remain there until time to mate again. They are well suited for the water life, and can stay submerged below the water for upwards of 45 minutes before rising to the top for air.

Alligator snapping turtles use a unique means of hunting for their prey. They have a built in lure to bring the prey to them.

They have a tongue that is worm shaped, and very bright red. When lying without any movement on the bottom of a river or lake, they will flick the tongue and draw in curious fish or frogs to see what manner or worm or food this is, at which time they snatch the prey from the water.

As adults, the Alligator snapper has no real natural predator aside from human beings, who often take them for the meat (to make turtle soup) and the shell for adornments. They are also sold at times to exotic animal collectors.
They are stable but because of unregulated harvesting and sales of the Alligator snapper, and habitat loss due to humans encroachment on their turf, they are protected in most states, and in nearly all areas where they live or range.