Those that are familiar with wildlife in Madagascar are familiar with the Fossa, though these animals are not well known by those from the rest of the world. The Fossa is a mammal and is thought to be most closely related to the mongoose. Most know of this animal because it is the second largest carnivore on the island of Madagascar, second only to the Nile crocodile.

The animals look somewhat like a cat and they can move from the ground to trees just as easily, in fact they are often likened to squirrels in the way they are able to move. The males of this species usually measure about 29 to 31 inches long and they also have a tail that is usually the same length as their body, weighing in at 13-22 pounds. The females are a bit smaller weighing 11 to 15 pounds and measuring 25 to 27 inches long, not including the tail. 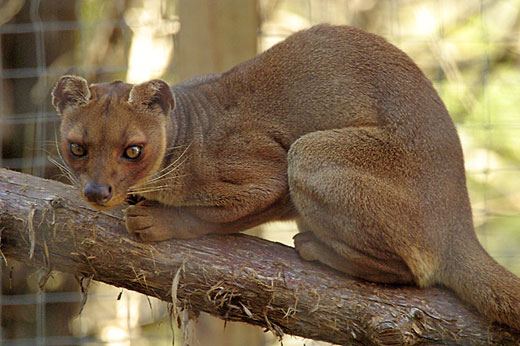 It was once thought that the Fossa was a strictly nocturnal animal, but this is no longer the case as studies have shown that they are active during the day time and night time hours. When they are active seems to depend entirely on the seasons and what prey are available.

The Fossa can generally be found in the dry deciduous forests of Madagascar. The area in which they seem to be most plentiful is in the Kirindy Forest, which is located north of the city of Morondava on the island of Madagascar. The Fossa is one of many animals that is only found in this region of the world, though it is endangered and available in numbers less than 2,500.

The Fossa is definitely a carnivore and its climbing skills and cat like agility make hunting quite simple for the species. These animals are known to eat birds, fish, and are known to hunt lemurs. There are many legends in Madagascar that the animals will hunt cattle or humans, but there are no documented cases of these animals attacking without cause on record. There is a record of a very large Fossa that was about six feet long and weighed in at about 40 pounds that is thought to have fed on larger lemurs, but there is still no evidence that this species will feed on humans or cattle. The Fossa is known to have a significant predatory impact on the island as it is able to prey on just about any type of animal and has virtually no predators itself!

The Fossa is known to live for about 20 years in captivity, though there are no good estimates on how long they live in the wild. What is known is that when the Fossa pups are born they are both blind and toothless. The pups will be completely dependent on their mother for about one year and do not leave the family nest until they are four to five months old. It is not until the Fossa is four years old that it will begin to breed.