The Screech owl is one of the smaller owls, standing just seven to ten inches tall when fully grown, but the noise that can emit from one of these tiny owls is nothing short of hair raising.

They emit a short series of very mellow sounding hoots, rather like a wooden flute once in a while, but more typical is the quavering eerie wail that echoes through the forests and outward.

The screech owl is in fact fairly easy for people to imitate and the imitations that people can do will very often get a resultant reply,  or curious or outraged responses from other birds as well.

Screech owls will hunt from dusk until dawn, most of their hunting being the first four or five hours after dark sets in. 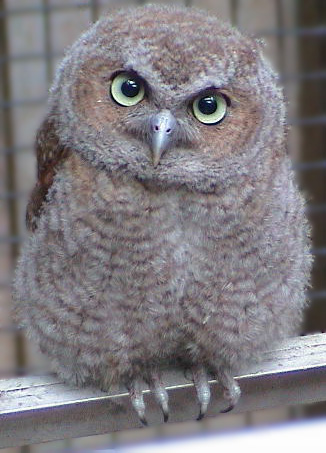 Primarily they will perch and dive, but may hover. Mainly the screech owl will hunt in the woods, but will go out into the open field or a swampy area briefly.
They spot the prey, dive very rapidly and grasp their catch with very sharp talons.
Screech owls will also capture insects and take them as well.
The small prey is usually swallowed in one piece, while the larger prey is carried to a perch and torn with talons.
The Screech Owl will eat chipmunks, rats,squirrels, shrews, moles, as well as birds such as the grouse and quail. The Screech owl will usually breed in  April,and have a very unique  courtship and mating ritual. Males approach females, calling from many different branches until they are close to the female and then will  bob his head and swivel it and even wink at the female.
If she accepts the male as a mate she will move in closer and they will touch bills, and very often preen each other.
Screech owls will mate for life but if the previous mate disappears they will accept a new mate in its stead.

The Screech owl will almost always nest in the cavity of a tree, but will sometimes take over other birds nests, such as a used woodpecker nest that already sit inside the tree.

The female will lay about 4 or 5 eggs, but sometimes as many as 8 and in about 25 days they will begin to hatch.
The females do the incubating, but the males will help when necessary and also provide most of the food while the female is brooding.

**Special Thanks to Diana, a Fourth Grader at Centura School for finding the images for this article**