The Canada goose is one of the most common birds in the world, and as such may create some problems.

They have a black head and neck a white chin strap marking and a brown grey body.

There are several other species of the Canada goose.

The Canada goose is a relatively large goose and can weigh as much as about 16 pounds and be about forty inches long. Males and females are nearly identical, with a wingspan of about 60 inches, or five feet.

The males are extremely aggressive in defending a territory or a perceived territory and there are places in the mid west where farmers have used them as watch animals rather than a dog.

Canada Geese will feed on plant matter, and water weeds, as well as the odd grain and grasses. They will flock to a vacant field where corn was grown and peck at the remnants in huge numbers.

Their average lifespan is between 12 and twenty years in the wild.

During their second year Canada geese take a mate. Most couples stay together their entire lives. If one is killed they may take new mates but otherwise it is uncommon.

The female will lay from 4 to 8 eggs and both mother and father will guard the nest.

The males are extreme in their protective behavior of both nest and goslings once they are hatched.

During the incubation process mother and father lose their flight capabilities and so cannot fly again until their eggs hatch. This will last for about 4 weeks.

One the goslings are hatched they are often seen with the parents. The female usually leads while the other is behind the goslings, and they will react very violently to any approach, whether it be from human or even something so small as a blackbird.

The goslings fledge, or learn to fly at about nine weeks. They do not leave the parents side until after the first spring migration when they will return to their birthplace.

Adult geese are often seen leading their goslings in a line, usually with one parent at the front, and the other at the back of the “parade”. While protecting their goslings, parents often violently chase away nearby creatures, from small blackbirds to other geese, to humans that approach, after warning them by giving off a hissing sound. 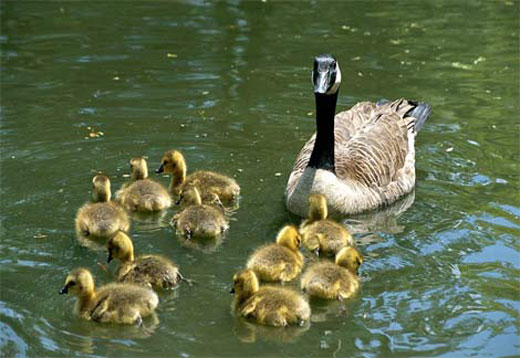 A Canada goose watches over ten fuzzy babies as they swim

Most of the species that prey on eggs will also take a gosling, if there’s an opportunity. However, geese may form groups of a number of goslings and a few adults, called crèches. The offspring enter the fledging stage anytime from 6 to 9 weeks of age.

The young do not leave their parents until after the spring migration, when they return to their birthplace.

Once they reach adulthood, Canada Geese are rarely preyed on, but can be taken by Coyotes, Red Foxes, Gray Wolves, Snowy Owls, Great Horned Owls and Golden Eagles.