When fishermen separate a young orca named Willy from his parents, he ends up in an aquarium at a marina in the Seattle area. Meanwhile, a street kid named Jesse (Jason James Richter) gets caught vandalizing the marina, but his social worker, Dwight (Mykelti Williamson), helps him avoid legal consequences, provided he cleans up his mess at the marina.

While there, Jesse befriends the orca and teaches him tricks, something the trainer, Rae (Lori Petty), had failed to do. However, when Willy is unable to perform effectively in front of the audience, the owner of the marina plans to kill Willy for the insurance money. Thus, Jesse and his friends, including an Indian shaman named Randolph (August Schellenberg), must free Willy.

The aquatic star of this film was an orca named Keiko. The huge national and international success of this movie inspired a letter writing campaign to get Keiko released from his captivity as an attraction in the amusement park Reino Aventura in Mexico City. Keiko was released into a bigger pool in Oregon when his dorsal fin was damaged because his old pool was too small. Though Keiko was eventually released, he continually sought out human contact, and eventually died near Norway.. More.. 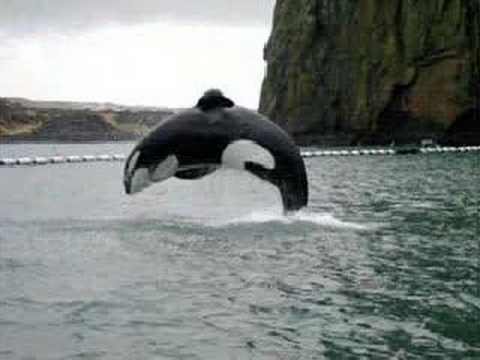 Jesse, a homeless orphan who spends his days evading the police, finally gets caught spray painting a whale tank at a local park. Because he distrusts adults intensely, Jesse’s not too happy when authorities place him in a foster home and sentence him to clean up the tank he vandalized.

Unexpectedly, Willy, the whale who inhabits the tank, takes a liking to Jesse, and the animal and child develop a bond — a bond that also helps Jesse open up to the adults in his life, including his new parents and the whale’s caretakers.

But then Jesse learns that Dial, who owns the park, only wants to keep Willy if he can be trained to perform for an audience. Can the boy find a way to save his beloved whale before Dial plays some dirty tricks of his own?

Mistake #1
When Jesse jumps into the pool to ride on Willy’s back for the first time he is fully submerged. However, while riding the whale, his hair is dry.

Mistake #2
When Jesse touches Willy for the first time, when the camera angle changes to behind Jesse, his hair is much curlier than before, and is no longer wet. More..