The Saki Monkey is one species of the New World monkeys, which is a part of the genus Pithecia. This species is thought to be very closely related to the bearded Saki monkeys, though they are their own separate species. These monkeys are recognized by their small size and their long bushy tails. They are also distinguishable due to their furry but rough skin, their grey or sometimes reddish brown coloring, their naked faces, and their hooded heads. Many state that this species of monkey is very serious looking. 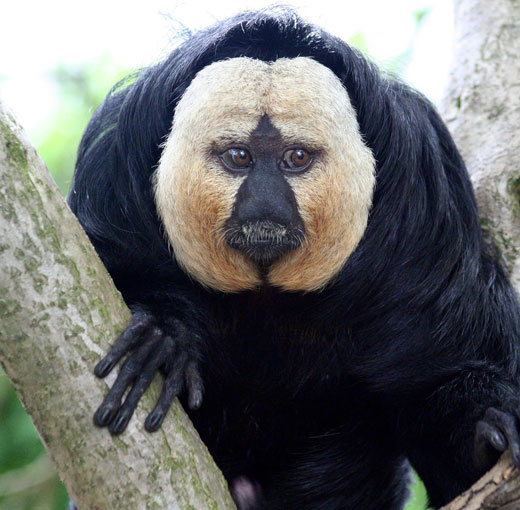 The Saki Monkeys are primarily found in Northern and Central South America from Colombia to Peru and even into Bolivia and Brazil. The species is diurnal, meaning they are active during the day and they sleep at night. The Saki Monkey is known to live in the trees of the rain forests and it is the rare occasion when they are actually found walking on the land. This species is seen moving on all fours, though it is known that they can move on just their hind legs when maneuvering through the branches and even jumping long distances through the trees. The monkeys even sleep all curled up in the trees!

The Diet of the Saki Monkey

The Saki Monkey is an omnivore and they eat a wide variety of things that they find in the rain forest such as fruits, flowers, insects, leaves, and even rodents and bats. The monkeys are adept hunters and they generally take what they can get. The exact diet of any given monkey will depend on what fruits and trees are in season as well as exactly where they live and the vegetation that is available to them from the trees. The Saki Monkey mates when a female is fertile, meaning there is not a designated mating season so babies can be born any time during the year. This species has a gestation period of 150 to 180 days and the females will give birth to just one young at a time. The babies are weaned after being breastfed for four months and they are considered to be fully mature in three years. The Saki Monkey can live up to 14 years.

This species lives in what are called federations, which is a group of parents and their offspring, all of which have their mated pairs. The pairs are usually together for life or long periods and they are known to be very territorial over the area that they consider home and even their hunting grounds. While shy and avoidant of humans, these monkeys communicate with one another with high pitched cries and twitters that are specific to their federation, as is the case with loud roars that they use to warn one another of incoming threats.

The ability to communicate within this species is amazing and interesting to study as it sheds light on the monkeys as well as how the federations function.