The hermit crab is known in many cultures as a great pet, though these crabs can be found in nature, too! What many people do not know about this species is that it is not closely related to a true crab whatsoever. What sets these crabs apart from other crabs is that they have a very soft body, its abdomen especially, and it is protected by an empty seashell that it inhabits. It is the practice of inhabiting the shells of others that has given the hermit crab its name. The crabs often take over the shells of snails and mollusks and it has to replace its shell as it grows to accommodate for its increasing size. 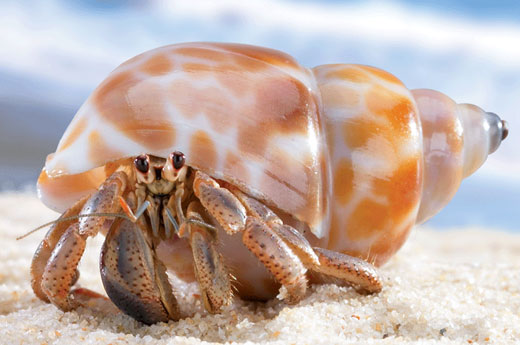 What is amazing is that there are more than 500 species of hermit crabs that are known around the world. Most of the 500 species can be found in salt water and they simply find new shells as they need them, though there is a species that no longer inhabits shells and lives just like they are. This species that no longer requires the use of the shell is the king crabs.

Hermit crabs can be found in a wide range of places, but most of the more than 500 species are aquatic, meaning they live around water, more specifically around salt water. These crabs can be found on or near coral reefs, in deep waters, and near shore lines. Hermit crabs live in large colonies, often with more than 100 individuals, and it has been shown that they do not survive in smaller numbers. Hermit crabs prefer a salinity of 1.023 and 1.025 and they grow the best when they are located in waters of four to 14 degrees Celsius for temperate species and 24 to 27 degrees Celsius for tropical species. 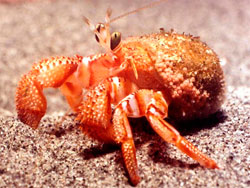 The diet of hermit crabs really depends on where they live. The smaller species usually eat algae and other debris that they find in the water. Many hermit crabs that are kept as pets will also eat fresh fruits and vegetables. Hermit crabs are omnivores or herbivores and will eat a wide variety of foods. There are some larger species that will actually eat coral, clams, and a wide variety of crustaceans.

Many people keep hermit crabs as pets, but not all species will do well away from their native habitats. The two most commonly kept pets are the Caribbean hermit crabs and the Ecuadorian hermit crabs. There are a few other species that are able to be kept as pets, but these are generally the most hearty. When you keep these animals as pets you should be sure that you provide them with the proper food and perhaps consider getting more than one as these animals do not thrive well in small numbers. It is also a good idea to plan ahead and make sure that your hermit crab has bigger shells to move to when they outgrow the shells that they come in.