The Granrojo is also known as “big red” and is a relatively recently discovered jellyfish that is a member of the family Ulmaridae and is the only member of the genus. This jellyfish is notable for many reasons and scientists are eager to learn more about it. This is a very large jellyfish, so that has a lot of people excited to learn more just because of that! The Granrojo is known to live in oceans in waters of depths between 600 and 1500 meters.

The species has been found to grow between 60 and 90 centimeters across, or two to three feet. The species is unusual because they have very wide and thick oral arms instead of the usual long tentacles that are found on other species of jellyfish. The species obtained the nick name “big red” because its entire medusa is a very deep red color. 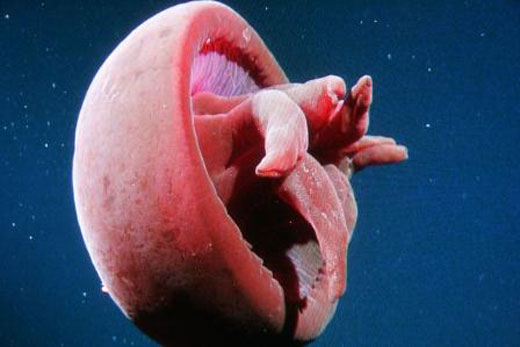 Tiburonia granrojo - a new species described by researchers from MBARI and from the Japanese Marine Science and Technology Center (JAMSTEC).

While the species is exciting, it should be noted that only 23 members have been found. Scientists have taken one small specimen that measured under 15 centimeters to study the species more closely. Much has been learned from the species already because of high resolution videos that were taken of it in the wild. The discovery of the Granrojo was announced in 2003 and has continued to be followed closely by many scientists and lay people.

The Granrojo is thought to be much like other jellyfish in that they do not have a heart, bones, eyes, or a brain. In addition, it is likely made up of about 95% water, yet it is an avid hunter and is able to move easily from location to location eating what the ocean has to offer. What is not known is what the lifespan of this species is. Generally all species of jellyfish have very short life spans, living just two to six months.

The Granrojo is found in many areas including those across the Pacific Ocean in the Sea of Cortez, Monterey Bay, Hawaii, as well as Japan. They are usually found in depths of up to 1500 meters and they seem to be able to handle warmer as well as cooler waters. As more is learned about this species it will be interesting to see where else they are found and what conditions they can withstand. 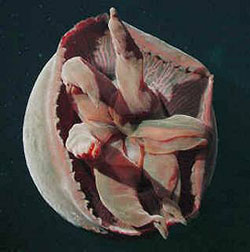 The diet of the Granrojo is thought to be much the same as other jellyfish species. They are passive drifters and they simply feed on smaller fish and zooplankton that get caught up in their tentacles as they drink along.

They likely also have an incomplete digestive system, which means that they use the same means of taking in food as they do for eliminating. It is unknown if they use their arms the way that other jellyfish use their tentacles, which deliver strong stinging sensations to those that get wrapped up in them.