If you are an avid diver just about anywhere in salt waters you have probably come across a furry lobster at some point. The furry lobster is also called the coral lobster, depending on what area of the world that you are diving in. These animals are small decapod crustaceans and they are very closely related to both the slipper lobster and the spiny lobster. The furry lobster has gotten its name from its appearance, as its entire body is covered in short hairs.

The species also has large antennae, but they are not as large as the antennae that are seen on the relatives of the furry lobster. Until 1990 the furry lobster was considered its own family but then they were subsumed into the Palinuradae family that has two genera and three species. The furry lobster can be differentiated from other species by white stripes on their legs, a dark colored body that ranges from brown to purple, and blue markings on the head, usually below the eyes. This type of lobster can grow to be about 70 centimeters in length and can easily weigh up to five kilograms. The distribution of the furry lobster is quite widespread. The species is generally found in abundance in the Indian and Pacific Oceans as well as off the east coast of Australia from the Capricorn Bunker Group in Queensland down to the South West Rocks in New South Wales. While there is an interest by fishermen in all of these areas to catch the species, they do not have much luck. For some reason, the furry lobster rarely will enter crayfish or lobster traps, therefore they have to be caught by divers that are using their hands or spears.

The habitat of the furry lobster doesn’t seem to vary much despite the fact that they are found over a wide area of land. The species is usually found in rocky areas or coral reefs, which is why they are often called coral lobsters. The furry lobster likes to be able to hide in the cracks of the rocks and coral from predators, which are numerous and vary from location to location.

The diet of the furry lobster is not unlike most other lobsters. While many used to think that lobsters feed on dead things, this is not always true. Furry lobsters are known to feed on fresh things such as crabs, mussels, clams, and even other lobsters. These animals generally feed at night and are creatures of opportunity, often eating what their environment readily provides. 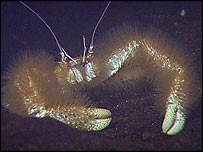 The female furry lobster will generally mate when she is in a soft shell state, which is right after she sheds her shell, or molts. Female furry lobsters are known to be able to carry sperm for up to two years, choosing when she wants to fertilize up to 75,000 eggs!

The female carries the eggs inside for nine to 12 months and then she will carry them for another 12 months under her tail. When the eggs finally hatch the larvae will simply float near the surface of the water for four to six weeks. Astonishingly, out of every 50,000 eggs that are laid, only two lobsters will survive.