The Axolotl is one of the Mexican neotenic mole salamanders. This species belongs to the Tiger Salamander complex and they are different from the other species because they never go through metamorphosis so even as adults they are gilled and aquatic.

The species is well known in Mexico, and that is because they are thought to have originated from the lake that lies under Mexico City. These may seem like somewhat unremarkable fish, but the fact is that they are very interesting to scientists because they are able to regenerate most of their body parts and also because breeding is quite simple and they have very large embryos. The Axolotl is often confused with waterdogs, but they are not the same species. The interest in these fish extends all over the world with people keeping the Axolotl as pets in the United States, Great Britain, Japan, Australia, and beyond.

The Axolotl is usually about six to 18 inches in length when they are mature, though the average is right about nine inches. The species has external gills, a fin that runs from the head to the vent, and heads that are wide with lidless eyes. Males and females can be differentiated due to the wider body of the female; the size difference is based on the fact that the females are full of eggs. The Axolotl have been seen in four different colors, which are brown, black, pink, and albino. The two common varieties are the black and brown with the other two being mutants.

The Axolotl is native to just one lake that is still in existence today, and that is Lake Xochimlico. They were once found in Lake Chalco as well, but that lake was drained in an attempt to avoid flooding in and around the area. The Axolotl basically seems to prefer bodies of water that are located in high altitude. The species was once very abundant in the cool waters that rarely rise above 68 degrees Fahrenheit, but today the species is becoming more and more limited as they are sold as food in Mexican markets. The expansion of Mexico City has also placed a burden on all wild animals. Because of these things the Axolotl is listed as endangered in the wild. 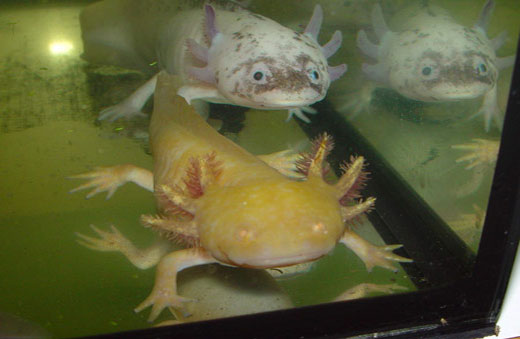 The Axolotl is most definitely a carnivore. The species will feed off small creatures such as a variety of insects, worms, and small fish. Those that keep the Axolotl as pets usually feed them live bloodworms, earthworms, wax worms, frozen worms, and trout and salmon pellets. The species eats by smelling its food and then it snaps at it and will suck the food into their stomach, somewhat like a vacuum. For this reason, it is important that Axolotl kept as pets not be kept with other fish or even smaller Axolotl as they will eat one another. An adult Axolotl can be kept with other adults, but anything smaller will be consumed.