Also known as the Orange Banksia, the Acorn Banksia is a tree or shrub species of the genus Banksia. It was first described by the English Botanist, John Lindley, in 1840. It was thought that he collected the materials from James Drummond in 1839. There are actually no recognised varieties of Acorn Banksias, also it is known to create a hybrid with the Banksia hookeriana. As the name suggets, the Orange Banksia is orange in colour

The Acorn Banksia is found only in Western Australia. Its range is as far north as Shark Bay, to as far south as Kojonup. It only grows in sandy soil and is usually the dominant plant found in low woodland and scrubland. It is usually pollinated by birds and provides food for a variety of animals during the autumn and winter months. It is an important food source for honeyeaters and it is actually critical to this birds’ survival in the Avon Wheatbelt region where is is the only plant in flower that produces nectar at several times of the year.

The Acorn Banksia tree can grow up to 10 metres in the south. However, in the northern reaches, it can only grow shorter than a tree or a spreading shrub of about 4 metres in height. It can diminish in size as the climate gets both dryer and warmer further north. Its stems are mottled grey, thin, and either have a grooved or smooth bark. Its green leaves are dull, and are about 15 to 27 cm long.

The Banks flowers are a spike which is an inflorescence consisting of hundreds of small individual flowers (also known as florets). The Acorn Banksia has cream-coloured flowers with a bright orange limb that is not revealed until the flowers open. It can progressively turn bright orange after a period of a few days. Old flowers will then fall away after flowering has been completed, revealing the axis which may have up to 60 embedded follicles. Its root system consists of a sinker root as well as 10 lateral roots. The sinker root grows down to the water table, and can grow up to 15 metres if the water table is that deep below the surface.

This plant is considered as an ‘outstanding ornamental species’. This is due to its bright colours and conspicuous flower spikes so it is popular to plant in gardens. It is also excellent to attract honeyeaters to the garden. The dwarf form of the Acorn Banksia which only reaches 1 metre high is sold as “Little Kalbarri Candles”. 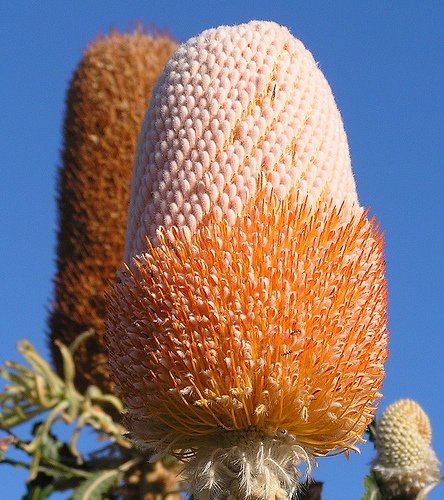 Gardeners interested in planting this at home or elsewhere should plant it in an area with a Mediterranean climate. It does not do well where summers are very humid. It needs to be planted in a sunny position where soil can be well-drained. It can also tolerate a moderate amount of frost. When pruning this tree, prune it lightly so it is not below the green foliage. If it is cut below that area, it will become straggly as it ages. Seeds do not need any treatment before it is sowed into the ground, and will take between 21 to 35 days to germinate.