Naked Mole Rat is a burrowing rodent inhabited to the parts of East Africa. It is the only species distinguished in genus Heterocephalus. It is famous for its eusocial lifestyle, unlike other mammals. This lifestyle represents the highest level of social organization in a hierarchical classification. It is a unique set of qualities physically which make it different form other mammals. These qualities give it the strength required to thrive in a harsh, underground environment. It does not encounter sense of pain in its skin. So, it has a cold-blooded metabolism which means that it does not require adjusting its body temperature, but it automatically gets adjusted according to the kind of environment. 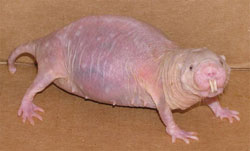 The long-lived naked mole-rat
Description
Here, the weight is mostly 30-35 g and the length is 8-10 cm long. Queens can weigh well beyond 50g, thus, being the largest in terms of weight. Their adaptation is good for thriving in underground conditions. But, the eye sight is poor as their eyes are nothing but narrow slits. They are very flexible while in underground as they can move backwards at the same rate at which they move forward. They have large and protruding teeth that are used to dig. In order to avoid filling their mouths with soil at the time of digging, their lips are sealed just behind their teeth. As far as the legs are concerned, they are thin and short.

They comprise of very little hair. Besides, they have wrinkled or yellowish skin. Whether or not oxygen supply is proper within the tunnels, they can easily get adapted to it. Their lungs are very small. Besides, its blood is such that it has a strong affinity for oxygen, which helps to amplify the oxygen intake. For an animal of its size, the metabolic rate ad the respiration is quite low. By the way, its metabolic rate could diminish up to 25 percent at the time of long periods of hunger or drought. A neurotransmitter called Substance P which acts as a source from which burning pain signals is sent to the central nervous system. They feel zilch of pain when reacted to acid or capsaicin.

Behavior
These mammals are one of the two unique mammals that display eusociality. It is equipped with a complex structure in which one female i.e. queen and one to three males reproduce, whereas the rest of the colony members act as workers. This organization is akin to that of ants, termites and some bees and wasps, and is very rare among mammals, barring platypus. However, there as an argument that human are eusocial too. Males and females are permitted to breed at one year of age. Gestation goes about for 70 days.

A litter varies from 3 to 12 pups, but may go as far and large as 25. In the wild, naked mole rats are mostly known to breed once in a year, if the litter survives. They breed all year long in captivity. The young when born are weighed about 2 g and are born blind. Subsequently, the young is nursed by the queen for the first month. After that, the colony members feed them feces until they are old enough to consume solid food.