Developed and used for medical research or as a pet, a miniature pig is also known as a micro pig or a teacup pig. These poor little animals have made headlines around the world due to a celebrity fad of owning a pet pig. One of the miniature pig breeds called the Yucatan is the Animal Rescue League of Boston’s unofficial mascot and was invited to the Wheelock Family Theater’s Charlotte Web production.

These pigs are usually sub-species of the Vietnamese pot-bellied pigs that were sent to zoos in the 1960’s to western nations. However, some miniature pigs are derived from European and American pigs. These pigs were later selected and bred for their small size for scientific research. The reason for this is that pigs that stay small have more advantages in medical research than pigs that grow larger, due to health issues. If the miniature pigs are overweight, they are spared from medical research but unfortunately they are sent to the chopping block to be raised in a farm for bacon production. 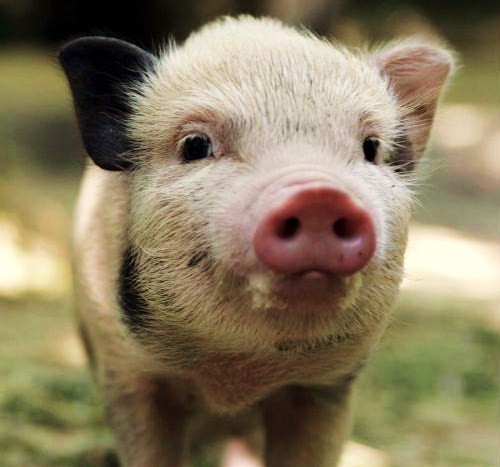 They were first used as a domestic pet in the USA in the 1980’s. Compared to its larger cousins, it weight less than 68kg (150lb) and are as small as 53cm (21 in). Nowadays, they are kept as pets all around the world, from Europe to Australia.

Yucatan Miniature – originating from Costa Rica, southern Mexico, and parts of Latin America, it is the only naturally occurring miniature pig. They are slate gray or black, mostly hairless, and have a short snout and profile.

Yucatan Micro Pig – this is similar to the Yucatan Miniature (see above) except that it is smaller and was developed in 1978 by the Swine Laboratory at Colorado State University.

Hormel Miniature Pig (Minnesota or Sinclair) – it is a cross between Alabama’s guinea hogs and Catalina Island’s wild boars. Some also include genes from Louisiana’s Piney Woods pigs and Guam’s Ras-n-Lansa pigs. It was developed by Hormel Institute at the University of Minnesota in 1949.

Pittman Moore – it is derived from feral swamp hogs in southern USA. It was originally developed by the University of Minnesota and is distributed by Vita-Vet Laboratories. An adult Pittman Moore weighs about 70kg. It has white hair, mostly white skin, and has dark spots.

Hanford Miniature – it was originally developed at the Northwest Research Laboratories in 1958. It is exclusively owned and supplied by Charles River, and is a cross between a Pittman Moore and a Falouse. It is white skinned and has less subcutaneous fats than other miniature pig breeds.

Goettingen Miniature – developed in West Germany at the University of Goettingen in 1980, it is a cross between a small Vietnamese pig and a Minnesota Miniature pig. It is highly used in Europe for research purposes. It also has white skin and the average weight of a 1 year old is 37kg. Ohmini – It is a cross between a Manchurian Pig, Hampshire pig, Duroc domestic pig, and Hormel miniature. It is black in colour, has a course haircoat, wrinkled skin, and exceptionally long ears. It was developed in Japan by Hioshi Ohmi in 1945.

Lee Sung – it was developed from Taiwanese small-ear pigs in 1975 at the University of Taiwan. A 1 year old pig has an average weight of 30kg.