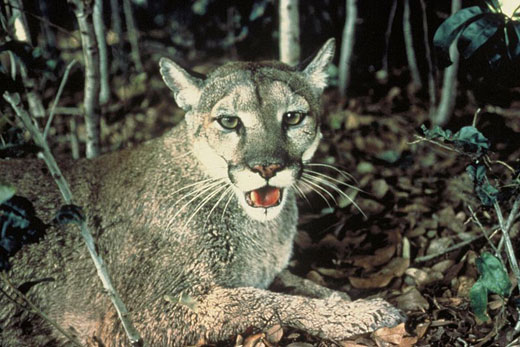 Florida panthers are about ten times bigger than your average house cat. This particular species is quite big with the males being larger than the females. Males usually weigh in around 40 to 70 kilograms while the females weigh in at 30 to 45 kilograms and they usually measure about 1.8 to 2.2 meters from the tip of their nose to the tip of their tails. The species, like all species of panthers, have very long claws and sharp teeth. Their claws usually measure about five inches long, and they use these claws not only to climb trees but also to hold onto their prey and tear meat to make eating easier. While the claws are quite long, they are retractable, which allows the animals to walk quietly when stalking their prey.

The Florida Panther can be found in the low pinelands, palm forest, and swamps of Southern Florida. While the species was originally found mostly in Florida, it is also found throughout the United States, though the numbers are limited. The species seems to prefer the warmer, more humid climates as opposed to the cooler climates. The species is known to inhabit the Big Cypress National Preserve, the Everglades National Park, and the Florida Panther National Wildlife Refuge. These areas only make up 5% of the animals historic range.

The Florida panther is a carnivore, meaning they only eat meat. These panthers usually hunt for and consume wild hogs, deer, raccoons, armadillos, rabbits, birds, and alligators. The species hunts alone because they will stalk their prey moving slowly and quietly through their habitat and then pouncing on their prey when the moment presents itself. The Florida panther uses its front paws to hold onto their prey while they use their teeth to bite into the neck, back, or throat to render it helpless. Much like humans, the panthers will eat three meals a day, but they’ll eat large amounts at one time and then basically “snack” on smaller prey when they are hungry. Pregnant females and females with cubs need to eat more than those that are not pregnant or nursing, but generally these animals eat a lot at each meal. 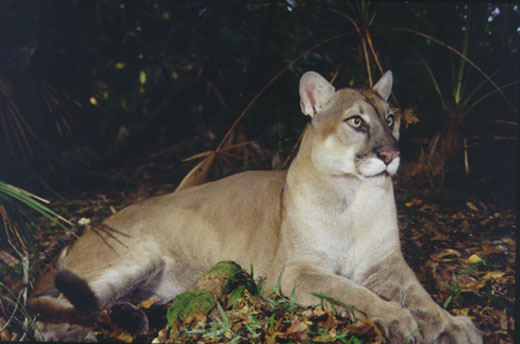 The Florida panther is known to live for about 12 years, though there was one panther that was reported to have lived for about 20 years, though this was in captivity. Most panthers do not die from old age, instead they usually die from fights with other panthers or even injuries that they acquire while hunting.