The smoky honeyeater is a species of bird that is seen in many areas of the world with new species being discovered all the time. In fact a new species of the honeyeater was discovered as recently as 2005 in the Foja Mountains. The bird is not protected as it is rated as a species of least concern, meaning it is not endangered or available only in very limited or declining numbers. Indonesia’s Papua province had been the refuge of this Smoky Honeyeater, a new species discovered during the scientific survey

The species is known to be quite active, noisy, and even aggressive toward one another and other animals. They are often seen in groups and will migrate in very large flocks. Some of the flocks seem to be nomadic while others will stay in one place for most of their lives.

The smoky honeyeater is found in both Indonesia and Papua New Guinea and is usually found in the subtropical and tropical moist mountains found in these regions of the world.

The smoky honeyeater is known to eat nectar but the bird also eats many insects and small animals. Being highly adaptable, the bird is also known to eat fruit with some birds eating more than others depending on what is available to them in the way of insects and small animals. It has been observed that many eat very little fruit while others will eat quite a bit, it seems to have more to do with what is accessible than preferences between birds. 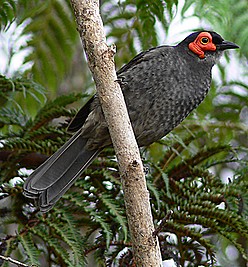 Smoky honeyeaters are monogamous, meaning that a male and a female develop a lifelong relationship. Breeding seasons can last as long as six months, yet it seems to happen from late winter to early spring. The birds build their nests on many different things ranging from low bushes to the tops of trees. The nests are usually in the forks of trees and are made of many things including plants, down, wool, feathers, human hair, spider webs, and even trash that they find along the way.

Once the nest is built the females will lay eggs that are pink or white and often have different color spots on them. Most females lay up to four eggs, though some lay just one. The incubation period usually lasts anywhere from 12 to 17 days and when the eggs hatch both the male and the female will feed the chicks. Most chicks grow feather and are ready to start flying in about 20 days, but it can take up to 32 days for some. There is a lot of variance where mating and new chicks are concerned depending on where nests are built, how they are built, and where exactly the smoky honeyeaters are located geographically.