The American brown pelican ranges from the Atlantic, Pacific and Gulf coasts of North and South America. They are most commonly seen from Virginia south to the mouth of the Amazon River and from the central coasts of California to the south of Chile and Galapagos Islands. The Gulf states of Alabama, Louisiana and Texas have played a large part in re-establishing the needed habitat and environment for recovery of the American Brown Pelican.

“At 42 to 54 inches long, weighing 8 to 10 pounds, and with a 6 1/2- to 7 1/2-foot wingspan, brown pelicans are the smallest members of the pelican family (there are seven species of pelican worldwide). 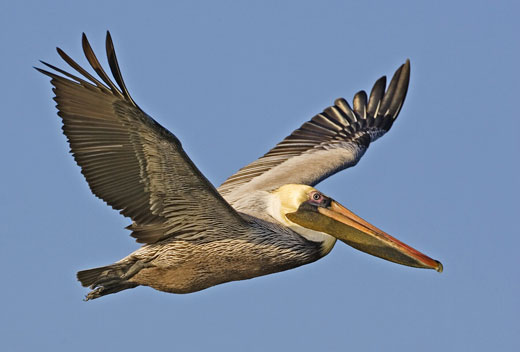 They can be identified by their chestnut-and-white necks; white heads with pale yellow crowns; brown-streaked back, rump, and tail; blackish-brown belly; grayish bill and pouch; and black legs and feet.”, states the United States Fish and Game Endangered Species file sheet.

A pelican can eat about four pounds of fish in a day and forages on the fish not normally used commercially.

Flying above the water at 60 or 70 feet, it’s extraordinary eyesight can see prey quickly, then the pelican dives, using the air in it’s pouch to aid it in diving under the water. After the pelican surfaces, there will be about 3 gallons of water and fish in the pouch, and gulls love to steal fish that come loose when the pelican is draining the water from its pouch.

Pelicans are communal birds, nesting in trees, on nests built in the bush or on mounds of dirt.

Two or three chalky white eggs are then laid, with the peak time March and April. Taking about a month to hatch the new-born birds are completely dependant on their parents for survival. Soft down appears first then feathers with the first flight in about 75 days.

President Roosevelt declared the Florida’s Pelican Island as the first national wildlife refuge in 1903 and in 1918 passage of the Migratory Bird Treaty Act gave further protection to pelicans.

During the 1940’s, the birds were valued for their feathers used to decorate women’s hats.

Poaching and the use of the pesticide DDT, contaminated the fish the pelicans fed on, leading to eggshells that were too thin to hold the weight of unborn birds. With the use of DDT banned in the 1970’s and the listing of the pelicans as endangered in 1972, they slowly begin to recover. Now a little more then a century from being noticed by President Roosevelt, the brown pelican is no longer threatened and has recovered well in much of its range.