The American white pelican ranges from the Atlantic, Pacific and Gulf coasts of North and South America.

They are most commonly seen from Virginia south to the mouth of the Amazon River and from the central coasts of California to the south of Chile and Galapagos Islands, their main summer habitat being the Eastern Coast of the United States, from Virginia to Florida. 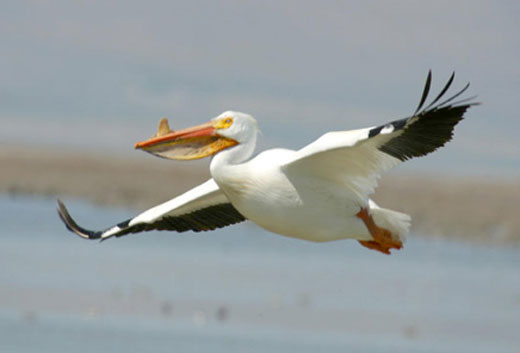 Ranging in size from about 42 to 54 inches long, the Pelican will weight from 8 to 10 pounds, and with a 6 1/2- to 7 1/2-foot wingspan, American white pelicans are among the middle of the road for Pelican species. (there are seven species of pelican worldwide).

A pelican can and will eat about four pounds of fish in a day more if they are feeding pelican chicks and will forage on the fish not normally used commercially so is not considered a threat to fishermen in most cases.

The Pelican can fly at heights of about 50 or 70 feet above the water and with some extremely excellent eyesight can see their prey from that distance and then rapidly dive, using the air that is trapped in its pouch to help it to dive down deep under the water.

As with any other Pelican, when it rises back to the top, there will be about three gallons of water as well as the fish they’ve caught.

When the Pelican drains its pouch after the dive, gulls will lie in wait to steal the smaller fish that also come loose during the process, making a meal for themselves.

Pelicans are what is known as a communal bird, living in communities of many families, nesting in trees or in other nests they build on mounds of dirt.

When breeding time rolls around, which is March or April, they will produce two or three eggs, which take about a month to hatch.

When they have hatched, the parents take turns caring for them, and the small birds are completely dependent on the parents for care for about 2 months, during which time they are covered in a soft puffy down feathers.

The real feathers grow in at about 75 days, and not long afterward the new hatchling will attempt his first flight.

Poaching as well as the contaminated the fish the pelicans fed on, leading to eggshells that were too thin to hold the weight of unborn birds. With the use of DDT banned in the 1970’s and the listing of the pelicans as endangered in 1972, all species of Pelican began to make a recovery.