The Box Jellyfish is a water dweller. An invertebrate that belongs to the family of Cubgoza, the box jellyfish is not an actual jellyfish at all, but a separate animal entirely.

The box jellyfish is found off the coast of Australia, in the Phillipines, Hawaii, Vietname and most tropical areas, where they are rampant in the warm water just offshore.

The Box Jellyfish is known best and most infamous for the venom it injects which is extremely powerful and excruciatingly painful. 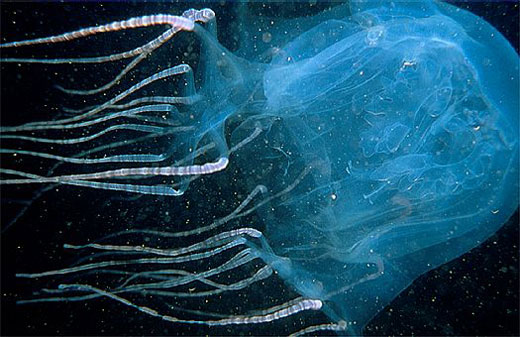 The Chironex fleckeri and the Carukia barnesi (Irukandji) species are amongst the most venomous creatures in the world and the stings from these are not only extremely painful but are often fatal to human beings who come into contact with them when swimming.

The Box jelly uses this powerful venom in what is called a nematocyst, which is an object that is exclusive to this animal, and is used to either stun or kill prey prior to attempting to eat it.

Their venom is the most deadly in the entire animal world, causing at least 5,567 recorded deaths since 1884.

] Most often, these fatal stings are caused by what is the largest of the species of box jellyfish, the Chironex fleckeri, and it is usually fatal because of the very high concentration of nematocysts.

Australia summertime, which takes place from November to April and May sees a vast number of jellyfish in the warmer waters near northern Australia and most swimmers are bound to pools at these times.

Later the jellyfish dissappear during what is the Australian wintertime, when in fact very often the swimmer can’t use the ocean waters because of the temperature.

Australian researchers have used ultrasonic tagging to learn that these creatures sleep on the ocean floor between 3 am and dawn.

It is believed that they sleep to conserve energy and to avoid predators.

The Jellyfish sting can be fatal, however there is a first aid measure that is used very often on the beaches that can help to alleviate not only some of the pain but also help the sting to be less venomous, which is the application of vinegar so that the nematocysts which have not yet released their venom will not do so.

A box jelly can sting whether it is alive or dead.