Camel Spiders have become a household word since the inception of the Iraq war, because of the rumors of huge and bloodthirsty spiders being seen by service men, who also sent photos of spiders that were half the size of a man.

The Rumor mill from the Middle east has given us camel spiders that were large filled with venom and predators that could outrun a human and had a hefty appetite for actual mammals.

While these are myths, the Camel Spider is still an amazing creature, although it has been misidentified for years.
The camel spider, isn’t even really a spider, but rather a solpugid. 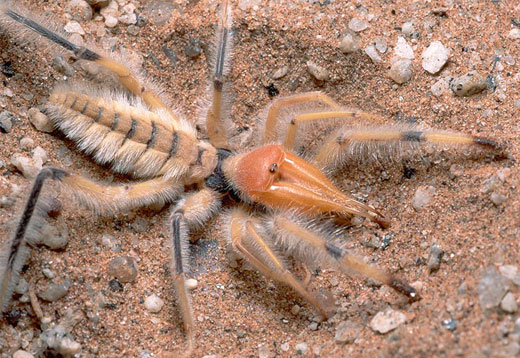 They are actually Giant Egyptian Solpugids, and grow to be a bit more than 6 inches long.

They are however extremely fast runners, with a top speed estimated between ten and fifteen miles per hour.

Although their bite is extremely painful, they are not deadly to humans. They are however vicious predators, who can bring nearly instant death to rodents, lizards and birds. They hunt primarily in the evening, and using jaws that are nearly impossible to escape from they will seize and hold a struggling prey until their jaws have done their work.

They have large, hardy jaws that can be about a third as long as their bodies, so their bite is strong enough to handle even the most wiggly of prey.

They use them to seize their victims and turn them to pulp with a chopping or sawing motion.

Camel spiders do use digestive fluids to liquefy their victims’ flesh, making it easy to suck the remains into their stomachs.